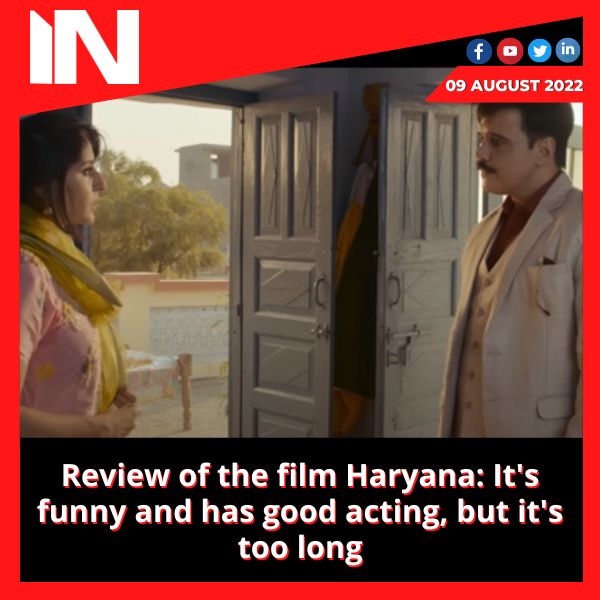 Three brothers named Mahender, Jaibeer, and Jugnu reside in a village in the state of Haryana. Mahender, the oldest brother, serves as the household’s father figure and is responsible for looking after everyone and everything. The youngest and most spoiled of the brothers, Jugnu, is the middle brother and attends a college in Hisar. The trio are followed as they fall in love and experience what that means for each of them.

Review: The film opens with a panoramic view of a misty canal and lush greenery before cutting to a rowdy wedding with loud louts dancing silly and imbibing themselves silly. This is a typical introduction to the North Indian state. In between, Mahender (Yash Tonk), a straightforward yet considerate character, is introduced.

Mahender is too busy running the business and taking care of his younger brothers to have time for love. His future wife Bimla (Ashlesha Sawant), who he eventually decides to marry, teaches him that he doesn’t even understand what love is. Due to his physical limitations, Jaibeer (Robbie Mairh) finds it awkward to express his feelings for Vasudha (Monika Sharma), while Jugnu (Aakarshan Singh), a movie buff, is madly in love with Alia Bhatt. The movie is about the twist in fate that each character’s love story causes.

With this film, television actor Sandeep Baswana makes his directing debut. He exhibits promise as the ship’s new captain. The idea that the love stories of the brothers are so dissimilar is an intriguing one. Casteism, politics, culture shock, and other topics are combined in the film, making it seem disjointed. Another downer is the sloppy screenplay and nearly three-hour running time. The story drags on for too long and eventually loses its charm. In terms of cinematography, the film does well.

A boy’s job is to turn on and off the tube light for the disco lights effect, and Jugnu goes with apples and bananas to propose to Alia, two examples of the quirks of country bumpkins that have been well-depicted. The three actors, Yash, Robbie, and Aakarshan, all deliver proficient performances. It’s nice to see Ashlesha Sawant as a modest, shy, but intelligent, and independent young woman. The middle brother’s love story is more intriguing, even though Jugnu’s track is the most entertaining, largely due to his three friends and their antics. Jaibeer is a tough guy who, in response to unreciprocated love, takes a drastic action and tries to make things right. The simplicity with which disputes are resolved (even when they involve complicated issues like caste-related violence against lovers and good guys Mahender succeeds in elections) puts the movie off-track