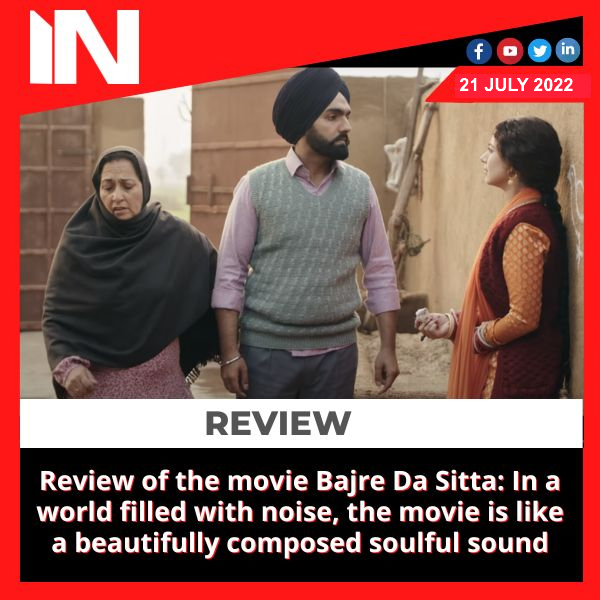 STORY
The story of two sisters Roop (Tania) and Basant is told in “Bajre Da Sitta,” a film from the late 1960s or early 1970s (Noor Chahal). These young women have remarkable singing ability, which is a blessing. Despite not receiving any formal singing instruction, their voices were compared to nightingale melodies. A recording studio contacts them because of their potential and asks to use them as one of their performers. However, as members of a traditional old-school Punjabi family, their dads forbid them from engaging in any singing or musical activity. Fortunately for the girls, after persistent pleading, the dads change their minds and permit the sister to sing, although with a lot of restrictions.

According to their parents’ wishes, the girls’ names are first kept a secret; however, when the record label’s new edition releases their names, things change. On the one hand, it makes Roop and Basant happy, but on the other, it brings shame to the name of their family. The yet-to-be-painted visions are washed away, and the girls are instructed not to sing ever again.

Review
Writer-director Jass Grewal has brought musical drama to the big screen in the world of masala entertainment. Given that it was a risk as well as a huge stride because it was the less-traveled path, Nevertheless, we are happy that Jass took the chance and made the film since such a lovely idea is like a breath of fresh air.

The movie’s musical undertone was established early on. It demonstrated how music has appeal and power that extends beyond simple instruments to the very fabric of the cosmos.

Additionally, Tania, Noor, Roop, and Basant left us in awe. Both of them are portraying straightforward, innocent girls who enjoy singing, playing, smiling, and spreading joy. They enjoy themselves when they sing even though they are unaware of the skill they have been given. Additionally, their sisterly relationship is a heartwarming aspect of them. It is something that guarantees that the smile never fades from your face since it is simple, relatable, and plain effortless.

When it comes to their individual performances, Tania has once again proven her mettle. The girl began her career by playing supporting roles, and now she shines as the film’s heroine. Her character is so brilliantly written in and of itself, but Tania gives it incredible life. Everything about her—simplicity, innocence, grace—makes an impression. In other words, Tania will make you laugh with her smile while simultaneously making you cry with her tears.
Regarding Noor Chahal’s career, it is clear that she will remain active. She made her acting debut with a part that was exquisitely written. Although her part lacked glamour, it was charming. She performed flawlessly in her role.

Ammy Virk also plays a crucial part in the movie. He appeared more frequently in the second half of the film, and this time he didn’t originally portray the ideal man. His character’s shortcomings, however, effectively captured the mentality of the populace at the time.
In actuality, every actor in the movie claimed the screen as their own. Guggu Gill’s portrayal of the stereotypically harsh Punjabi father is beyond description. He is the type of person whose facial expressions alone may convey a character’s emotions without the use of words. Other celebrities, including B.N. Sharma, Nirmal Rishi, Seema Kaushal, Rupinder Rupi, and others, have also demonstrated this.

Let’s talk about the movie’s ethereal and unseen hero, the music. The music, which is the true core of the movie, flourishes and penetrates hearts thanks to live instruments, heartfelt voices, and the folk touch. Bravo to Jaidev Kumar, Avvy Sra, and Ustad Hansraj Behl for their superb melody arrangements.

The film’s editor and cinematographer deserve special recognition as well, without whom many sequences would not have had the same impact. They took care of everything, from the flush of appropriately toned sepia to the addition of dramatic visual effects to making sure the length of the movie doesn’t look stretched.

Briefly said, “Bajre Da Sitta” is a masterfully woven drama with a predictably mild yet thought-provoking ending that has been enhanced by the work of a talented cast and crew.