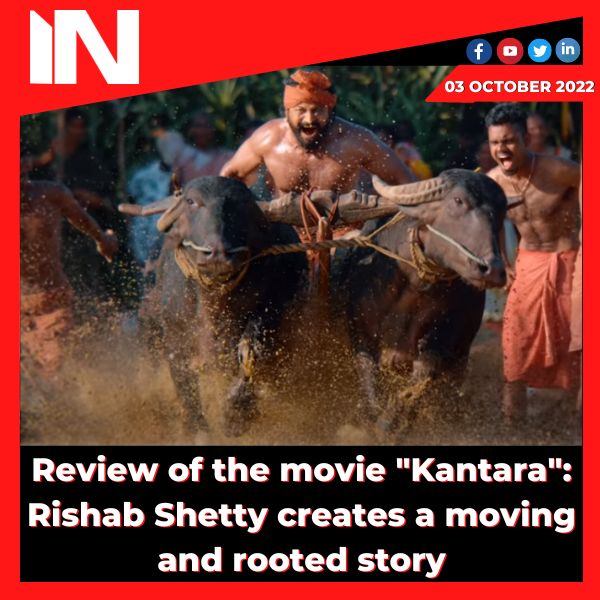 Our filmmakers have always had enough of material to work with when it comes to conflicts between man and environment. Even though it deals with the same idea, Rishab Shetty’s Kantara makes an effort to be unique and succeeds in doing so by remaining grounded and genuine.

Rishab demonstrated his talent for narrating tales set in the coastal region of Karnataka even in his earlier films, Ricky and Sa.Hi.Pra Shaale. He also walks into the woods with Kantara to discuss protecting trees, all the while producing a riveting revenge-action thriller with a mix of crime and religion.

A king trades a plot of land with his subjects in the 18th century and then departs in search of peace and happiness in the imaginary village of Dakshina Kannada, where Kantara is located. The same terrain poses a threat to the local tribal people centuries later, but they remain convinced that their guardian demigods will keep the village safe. The scenario then jumps to the 1990s, where we witness a conflict between forest-dwelling people and the forest inspector who wants to cleanse the region of any encroachment.

Shiva (Rishab Shetty) and his companions lead carefree lives, but they frequently clash with the forest ranger Murali (Kishore), who only seeks to protect the law. Devendra Suttur, a politician, is another character we have; Achyuth Kumar plays him. However, there is a greater evil at play, and Kantara tells the story of Shiva’s battle to bring justice to the villagers.

The picture has a fantastic conclusion at the end, which is unquestionably Kantara’s USP. In Kantara, different points of view are presented, and Rishab, who also wrote and directed the movie, does a fantastic job of bringing them all together.

With every movie, Rishab just gets better, and Hombale Films’ support has helped the director to make the movie more genuine. The chapters of Bhoota Kola and Kambala give it a unique flavour despite the fact that it deals with a well-known theme—the fight between humans and nature. The movie has gorgeous frames throughout. Kantara is lit up in brilliant tones by DOP Aravind Kashyap, who is skillfully assisted by art director Dharani Gange Putra in giving Kantara a pretty organic appearance.

Additionally, Kantara examines certain important topics like caste prejudice. Even though there isn’t a dedicated comedy track, several of the characters have enough peculiarities to up the fun factor. The narration in the movie is clear, and the well-staged action scenes deserve particular praise.

Shiva is brilliantly portrayed by actor Rishab, who gives life to this unusual character. For the part, he underwent a significant and severe change, and the results are obvious. Rishab will undoubtedly receive cheers and applause from the audience for his performance in the suspenseful conclusion. In Kantara, Sapthami Gowda gives a respectable performance as Shiva’s love interest and forest guard Leela. Kishore and Achyuth both put on strong performances, and it is enjoyable to see Kishore’s passionate ego conflicts with Shiva. The acting of Manasi Sudhir, Pramod Shetty, and Prakash Thuminad is also respectable.

With Kantara, Rishab once again works his acting and directing magic to produce a show with a strong social message and an even stronger finale.

Rishab Shetty is the filmmaker.

Four out of five stars

Alfaaz, a Punjabi singer, was assaulted in Mohali and hospitalised.