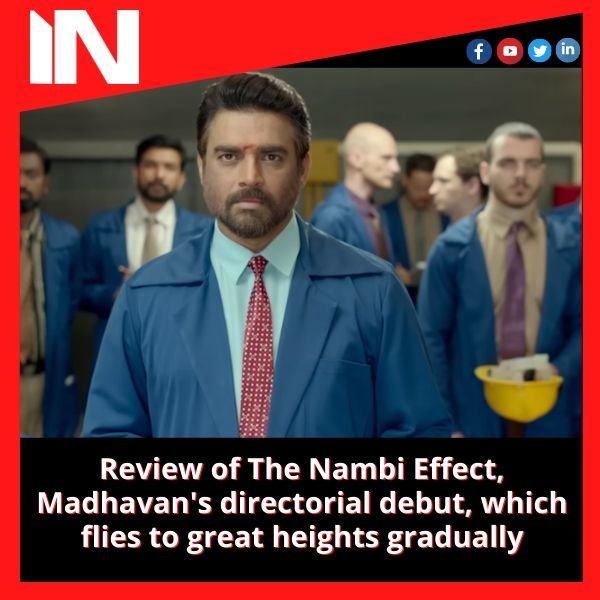 This biography, which is based on the life of Nambi Narayanan, one of India’s first rocket scientists, details his accomplishments, crazed passion for the nation’s space mission, unmatched dedication, and the accusation that ultimately led to the biggest personal and professional setback of his life.
Nambi Narayanan, a top scientist for the Indian Space Research Organization (ISRO) and recipient of the Padma Bhushan award, has had such an adventurous life that it begs the question of why it has taken so long for someone to produce a full-length feature film about him. R Madhavan’s directorial debut, which he also co-wrote and produced, was eventually successful after several failed attempts.

The movie takes place in flashback when Shah Rukh Khan, a superstar, listens to Nambi Narayanan (R Madhavan) tell his life story in 2014. The camera team for this lengthy interview is kicking themselves for being trapped in the studio late at night to capture a “long and boring” story of an elderly scientist. But as soon as Nambi starts speaking, everyone, even the host, is captivated by his tale.

Every part of Nambi’s journey is faithfully covered by Madhavan, including his achievements and difficulties in the workplace. The legendary Vikram Sarabhai (Rajit Kapoor), who is well aware of his prodigy, is none other than Nambi’s guru.

Nambi accepts a full scholarship from Princeton University despite the clear discrepancy between the course of study he is provided and what he wants to pursue. Nambi, however, is not one to follow rules; instead, he finds a way to not only understand what he wants but also excel at it. So much so that, despite being given the opportunity to work for NASA, he decides to work for ISRO and do whatever it takes to further India’s space goal.

While Nambi’s job is interesting and full of obstacles, it is also very technical, and Madhavan doesn’t hesitate to confuse the viewer with scientific astronomy words and jargon.

The first half is entirely devoted to displaying different aspects of Nambi’s slightly odd personality and astral explorations, with the background score acting as a cue for us to support our hero. Sometimes the details obscure the context, forcing us to concentrate on the big picture. Although the non-linear execution is thrilling and builds suspense, it also makes things more confusing.

R Madhavan convincingly recreates Nambi Narayanan’s real life in the film. Madhavan transforms into the character whose tale he is telling, down to the way he looks and how he speaks. Shah Rukh Khan plays the part of an interviewer with heart while maintaining his signature good looks and charisma.

He serves as a mirror of a nation’s conscience for a man who, despite all odds, committed his life to a cause. Simran as the thoughtful and respectable Meena Narayanan is a pleasant surprise. Simran’s portrayal helps to humanise Nambi’s dedication to his work and the struggles he faces. Sam Mohan stands out among the supporting players as Unni, whose character is far more developed than others.

The film’s second half is much more compelling and emotionally taxing, but the pacing is still plodding. It’s obvious that this movie is a specialised one. It offers an intriguing topic and an unknown tale of a man who was victimised for consistently standing up for his country.