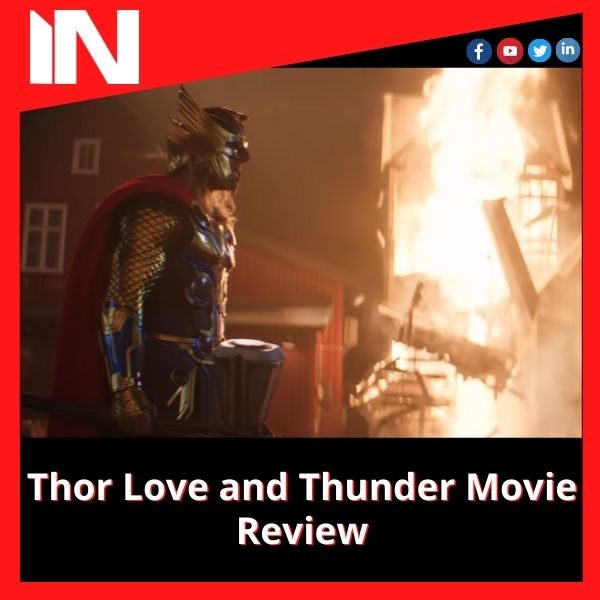 Jojo Rabbit, created by Taika Waititi, is a kid-friendly portrayal of Hitler and Nazi Germany. The movie made all the appropriate points, but it did so from a viewpoint that even kids could understand. He has treated Thor in this way: with love and thunder. In this superhero film, Thor is more concerned with his adoptive daughter’s breakfast than with any supervillains. He also worries about whether she is dressing appropriately for the day. For Thor (Chris Hemsworth), his imaginary companions are his hammer Mjolnir and war axe Strombreaker. Every youngster has an imaginary buddy. They respond to him when he speaks to them and are even seen to become envious if he favours one over the other.

In addition, Waititi transformed New Asgard into an amusement park, maybe as a subtle jab at Disney. The Asgardians reside in this idyllic setting and work as tour guides, hoteliers, and pub owners. They entertain tourists with plays about Thor’s bravery, serve them authentic Asgardian mead, and take them on rides in flying ships. Matt Damon, Sam Neill, and Luke Hemsworth make brilliant cameo appearances as Loki, Odin, and Thor, respectively. Tessa Thompson’s portrayal of the new Asgardian king Valkyrie, an influencer, is busy endorsing everything from cereal to designer brands.

The character played by Natalie Portman becoming the Mighty Thor is the next significant transformation. When he determines that Jane Foster is deserving and transforms her into a new Thor, Mjolnir, which was destroyed into pieces by Hela, resurrects itself. She doesn’t take herself too seriously and is constantly searching for a catchphrase to signal her entrance into a fight. In addition, she has cancer and is dying. Waitity, who also discussed Fascism and the Holocaust in Jojo Rabbit, doesn’t hesitate to discuss cancer in this movie for kids, believing that kids are more capable of handling such subjects than adults give them credit for. It’s wonderful to see Natalie Portman and Chris Hemsworth working together once more.

Like any other marriage, they have their ups and downs, but they also get to experience a crisis together. Their banter has a tragic undertone, which emotionally draws you in. It’s a comfort that the producers didn’t try to find a magic cure for her.

The director seemed unable to decide how he wants to depict Gorr. He appears as a sad parent after beginning as a supervillain. In reality, there isn’t a strong antagonist in the movie. He doesn’t even engage in combat with other deities so we can judge his skill level as a fighter. Even Asgardian youngsters are capable of repelling and fighting off shadow creatures, despite the fact that he has control over them. Gorr’s darkness may have been toned down because kids are its intended audience, but doing so deprives the movie of its sting. The movie greatly departs from the Marvel canon. There isn’t any sense of impending danger or tension.

Strangely, Thor appears conflicted about Gorr’s abduction of Asgaridian infants. There isn’t any sense of urgency to come to their aid. His major companions, the Guardians of The Galaxy, who we first see fighting alongside him in the movie, have no part in the rescue operation. Every circumstance is summed up in a clever one-liner. Of course you chuckle along, but you miss the gravitas that past Marvel movies had.

It’s possible that Waititi changed course to remind Marvel that they’ve been taking themselves too seriously and that it’s time to try something different. Sam Raimi did it when he converted the horror movie Doctor Strange in the Multiverse of Madness into a superhero movie. Thor: Love and Thunder has been cleverly transformed into a rom-com by Taika Waititi. The movie’s thesis is that love is all you need. Undoubtedly, there are a lot of CGI fights in it, but at the end of the day, it is a love story. Additionally, it’s not a Marvel creation but a Taika Waititi movie. It’s wonderful to see that Marvel is giving their directors such creative freedom. That undoubtedly indicates that they’re prepared for some major changes in th time to come.