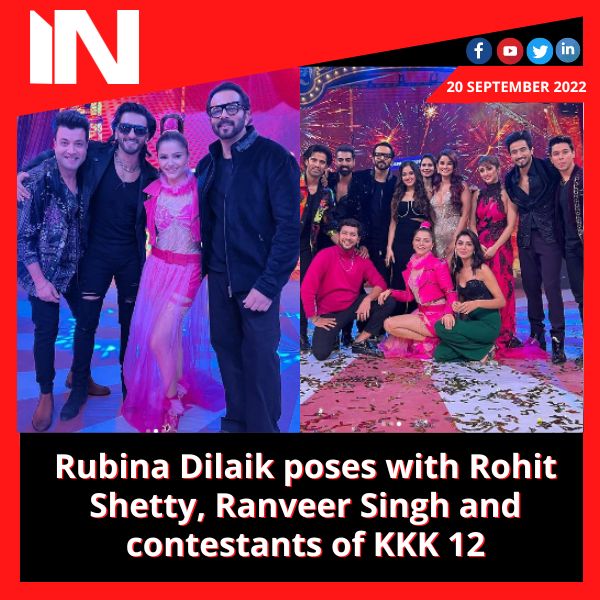 On Monday, Rubina Dailaik shared snippets from the Khatron Ke Khiladi 12 grand finale on her Instagram account. She posed alongside Varun Sharma, Ranveer Singh, and Rohit Shetty. Rubina wore a short pink leather jacket over a pink long slit dress. Another image shows her sitting down with the Khatron Ke Khiladi finalists who gathered for the shooting of the show’s forthcoming grand finale episode. Rohit Shetty, Jannat Zubair Rahmani, Sriti Jha, Shivangi Joshi, Chetna Pande, Tushar Kalia, and Mohit Malik were among the people in the group photo.

“Couldn’t have wished for a finer Grand Finale of Khatron Ke Khiladi with the wonderful @itsrohitshetty Sir and my star crush @ranveersingh and the complete cast of #Cirkus2022,” she wrote as the caption for the photo. She included the hashtag #kk #rubinadilaik and tagged colorstv. “Rubina, what a fantastic journey you had in kkk12,” one of her admirers remarked. I’m really happy for you. Another enthusiastic fan remarked, “Finally Rubina meets Ranveer.” “Can’t wait for the episode,” another admirer remarked. In support of Rubina’s incredible journey during Khatron Ke Khiladi season 12, several viewers used heart emoticons.

Filmmaker Rohit Shetty is the host of the adventure reality series Khatron Ke Khiladi. As a host, Rohit joined Khatron Ke Khiladi in 2014. The show’s third season was hosted by Priyanka Chopra, while the first two and fourth seasons were hosted by Akshay Kumar. Since he joined in the sixth season, Rohit has served as the host.

The season 12’s top three contenders are Rubina, Jannat, and Faisal. The role of transsexual Saumya Harman Singh in Shakti Astitva Ke Ehsaas Ki made Rubina a household name. She most recently made an appearance in Rajpal Yadav’s and Palash Mucchal’s film Ardh. She has additionally made several appearances in music videos after her Bigg Boss run.

Currently, she can be seen on the dance reality series Jhalak Dikhhla Ja 10.