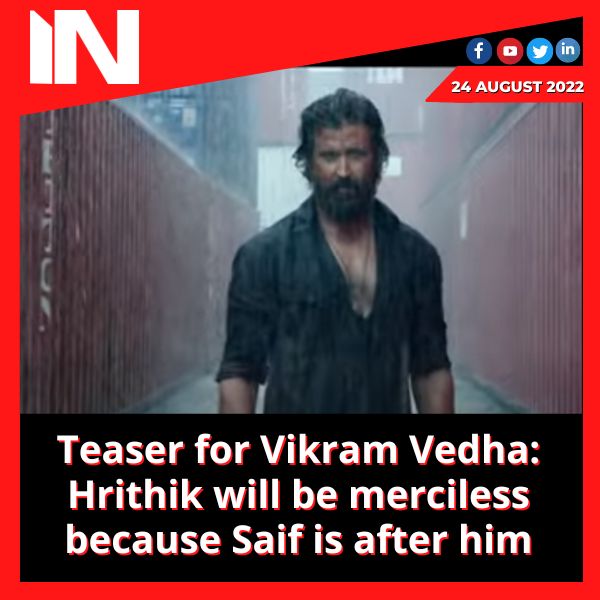 The teaser begins with Vikram, played by Saif Ali Khan, questioning Hrithik’s Vedha, who starts telling him a tale. It’s extremely simple to select between good and bad, but in this case, both sides are bad, Hrithik says in Hindi at the end of the film after a peek of an intense cat and mouse chase with multiple brutal killings and combat scenes.

Radhika Apte, Rohit Saraf, Yogita Bihani, and Sharib Hashmi are also featured in the movie. Vikram Vedha, which is directed by Pushkar-Gayatri, is the Hindi version of their 2017 Tamil film of the same name. Starring in the original were Vijay and R Madhavan in lead roles. The Hindi version will release in theatres on September 30.

There was a prior rumour that Hrithik had objected to filming in Uttar Pradesh. The production team had to replicate the lanes of Uttar Pradesh in Dubai because the actor refused to have the film’s budget increase because of this. The movie’s production company, Reliance Entertainment, dubbed the story “misleading” and claimed that Lucknow and other Indian cities were used extensively in the filming. The banner also stated that due to health issues with a sizable production team following the coronavirus outbreak, they chose to shoot a segment of the movie in the United Arab Emirates.

Pushkar responded to the story by telling the Hindustan Times, “We know how to make movies in a certain style, and we will only keep to that. I hope people don’t perceive it as being in any way “Bollywoodized.” Let’s put it this way: there hasn’t been any push to do it a certain way from anyone or anything. No one has put any pressure on the filmmakers or distributors to make the movies in this country in a specific style. Nobody has spoken with us about that.

They enjoyed the (original) film, and they wanted it made the way we do, Gayatri continued. Since we were under no outside pressure, we did everything we could.

In response to a Canadian director who dubbed The Kashmir Files rubbish, Vivek Agnihotri

Regarding criticisms of nepotism, Alia Bhatt said, “If you don’t like me, don’t watch me”