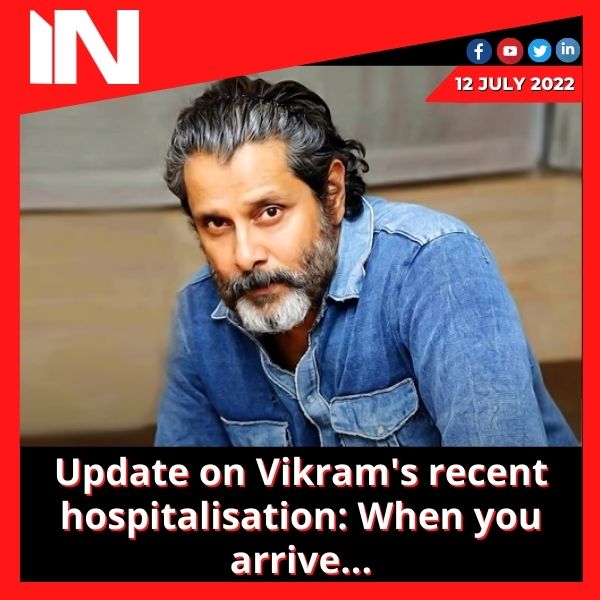 For the first time, actor Vikram has provided clarification over his recent hospitalisation, which he said was caused by “minor chest discomfort.” At the audio premiere of his next Tamil film Cobra on Monday night, Vikram maintained he did not experience a heart arrest. He continued by saying that some media outlets and users of social media platforms had overstated his state of health.

Hours before the teaser premiere of his historical epic Ponniyin Selvan: I, directed by Mani Ratnam, 56-year-old Vikram was taken to Chennai’s Kauvery Hospital. Soon, there were rumours that he had experienced a heart arrest. Later, both the hospital administration and his son Dhruv Vikram rejected the claim.

According to news source PTI, Vikram stated to reporters, “There was a minor chest ache. Just for that, I went to the hospital. But the situation was exaggerated. I’m doing fine. Nothing will happen to me when all of you are there with me. My friends, family, followers, and you are all here for me. He added that he had noticed a lot of inaccurate information concerning his health.

Vikram claimed that people had also become “creative” and recounted how some had altered a thumbnail to morph his face onto a sufferer. You shouldn’t put your hand on your chest. I could be having a heart attack, they (the media) might say.

I can envision the possible headline for tomorrow’s issue. They might claim that Vikram confirmed what they had predicted. They can assert that Vikram indicated during the Cobra audio launch on the dais that he suffered a heart attack “said he.

Dhruv Vikram, Vikram’s son, had earlier used Instagram to deny reports that the actor had had a heart attack. He noted: “Dear admirers and well-wishers, Appa experienced some minor chest discomfort and is receiving treatment for it. Contrary to what some stories state, he did not have a heart attack. Hearing rumours to this effect hurts us. Given that, we kindly ask that you grant our family the privacy it need at this time.

Now, Chiyaan is doing well. In a day, he should be released from the hospital. We trust that this statement will bring clarification and put an end to the untrue rumours.

Actor Vikram was brought to the Kauvery Hospital with complaints of chest discomfort, according to the hospital’s medical bulletin, which was signed by Aravindan Selvaraj, the executive director and co-founder of the facility. Our qualified doctors evaluated him and provided him with care. He did not experience a heart attack, is currently stable, and will shortly leave the hospital.

Ajay Gnanamuthu’s next film Cobra, which stars Vikram, is eagerly awaited for release. The movie is scheduled to debut in theatres on August 11. Roshan Mathew, Miya George, and Srinidhi Shetty are also featured. Irfan Pathan, a cricketer, makes his feature film debut with this movie.

Alongside Aishwarya Rai, Karthi, Trisha Krishnan, Jayaram, Jayam Ravi, and Prakash Raj, I, Vikram will appear in Ponniyin Selvan. The movie will premiere on September 30.

Advertisement
Related Topics:arriveFeaturedhospitalisationrecentupdateVikram
Up Next

Ranveer Singh and Deepika Padukone post photos from his birthday celebrations in the US.