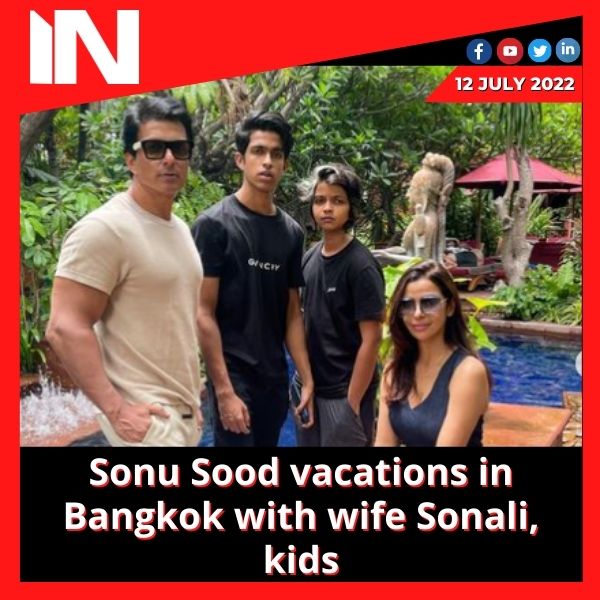 Sonu Sood, an actor, is currently on holiday in Bangkok. The actor uploaded images of his wife Sonali Sood, his children Ayaan and Ishant Sood, and themselves. After a few years of courtship, Sonu and Sonali were united in marriage in 1996.

Sonu captioned the images “Tropical Tuesday” while sharing them. Sonu appeared with his wife Sonali and their sons in the first photo. He can be seen scaling a tree in the next image. “Kya baat hai,” said filmmaker Farah Khan. Beautiful images, Sonu sir, one fan wrote. A different person asked, “Where are you vacationing, sir?”

Sonu was quite active in the community during the Covid-19 pandemic. He returned hundreds of Indians who were stuck abroad in 2020. At the time, he worked with Spice Jet to bring more than 1,500 Indian students who were trapped in Kyrgyzstan, Russia, Uzbekistan, the Philippines, Almaty, and other nations home. He deported hundreds of migrant workers back to their homes in India.

In 1999, the Tamil flicks Kallazhagar and Nenjinile served as Sonu’s feature film debut. Later, in 2002, he made his Bollywood debut in the film Shaheed-E-Azam, in which he played Bhagat Singh. Later, he had cameo appearances in a number of movies, including Yuva, Athadu, Aashiq Banaya Aapne, Ashok, Jodha Akbar, Kandireega, Dookudu, Shootout at Wadala, R… Rajkumar, and many others.

Sonu is presently the Roadies host on MTV. On April 8, 2022, the first episode of the new season aired. He most recently appeared in the movie Samrat Prithviraj by Dr. Chandraprakash Dwivedi as Chand Barai. The Yash Raj Films-produced film is based on the life of Prithviraj Chauhan, a mediaeval Indian monarch who battled against Muhammad of Ghor’s invasion. On June 3, 2022, the movie was made available in Telugu, Tamil, and Hindi. The Tamil movie Thamilarasan, starring Babu Yogeswaran, is also in Sonu’s plans.

When SRK was spotted in the audience, MS Dhoni’s ecstatic response was captured on camera

Update on Vikram’s recent hospitalisation: When you arrive…