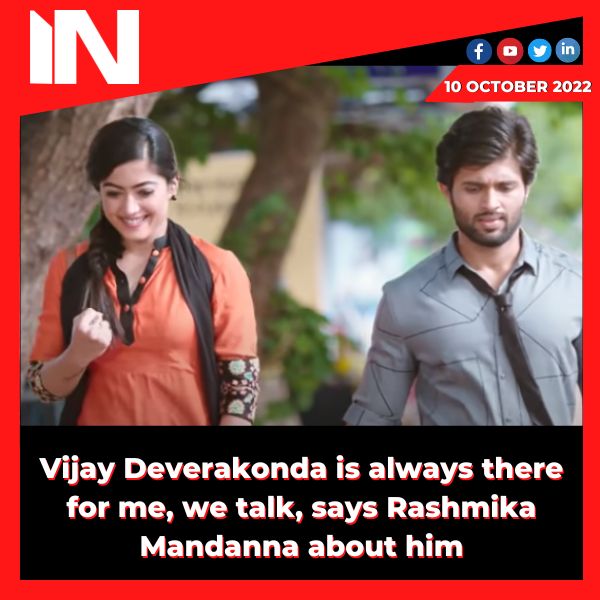 In a recent interview, Rashmika Mandanna discussed her connection with Vijay Deverakonda. In response to rumours that they were dating, the actor said she “sees what is going on social media” and thinks it’s “sweet.” Rashmika clarified, however, that she does not sit down with Vijay to talk about the rumours surrounding their romance. She and Vijay are’very close,’ the actor added.

With the October 7 release of Goodbye, Rashmika made her Bollywood debut. Along with other actors, Neena Gupta and Amitabh Bachchan appear in the movie. Rashmika was seen leaving for the Maldives at the Mumbai airport on the day of the movie’s release. The actor has been uploading solo images and Instagram updates from her holiday. However, other web users believe Vijay accompanied Rashmika on her trip to the Maldives.

Rashmika Mandanna spoke candidly to News 18 about rumours that she was seeing Vijay, saying, “I understand that we are actors and the light is on us, with people wanting to know more about. Vijay and I don’t really sit down and discuss what is occurring on social media, though I do occasionally watch a few videos and think it is quite nice. If given the chance, we would be playing board games with our 15-person gang. Although we are actors, having friends is just as vital to us and keeps us grounded.

Rashmika went on to say that she gets along well with Vijay and that they frequently talk about various topics. She also discussed Liger, Vijay’s Bollywood debut. Vijay made his Bollywood debut in August with the film Liger, which also starred Ananya Panday. In the Telugu flicks Geetha Govindam (2018) and Dear Comrade, Rashmika and Vijay appeared together (2019).

Because I have known Vijay for a very long time and because we are great friends, I go to him with any questions I have regarding the business. He is constantly there (for me). We share and talk about stuff, and we are pretty close friends. We collaborated on some of the biggest movies early in our careers, and this time he worked on a pan-Indian film with Liger, for which he has earned a tonne of praise, while I worked on a Hindi film (Goodbye). We can’t really speak for one another since, in my opinion, both of our careers have been unique and we haven’t travelled the same path, Rashmika remarked in the same interview.

In Pushpa: The Rule, the follow-up to her blockbuster from 2021 Pushpa: The Rise, Rashmika will also reprise her role as Srivalli. Both Allu Arjun and Fahadh Faasil appear in the movie. Her forthcoming films include Animal with Ranbir Kapoor, Varisu with Vijay, and Mission Majnu with Sidharth Malhotra. Following the success of his most recent film, Liger, Vijay is currently filming the Telugu love drama Kushi with Samantha Ruth Prabhu. Shiva Nirvana is directing the picture.

Kareena Kapoor poses with Malaika and Natasha on the streets of London in style.

Shehnaaz Gill yanks away when a curious fan reaches out to touch her.