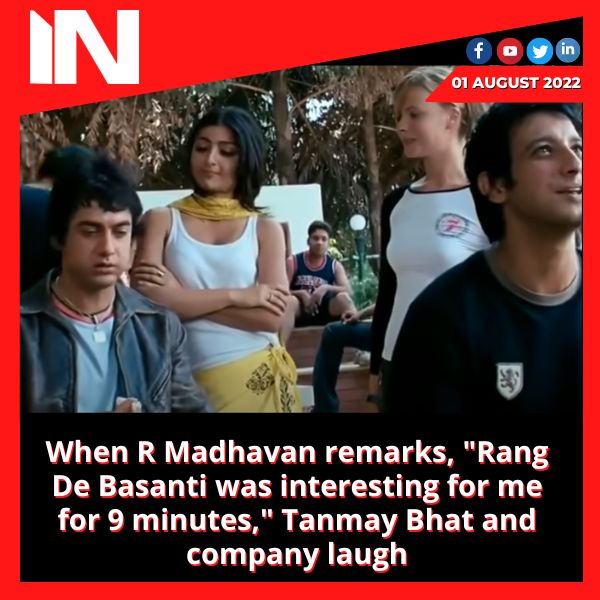 Even though he only had nine minutes of screen time in the 2006 movie Rang De Basanti, R Madhavan played a role that would define his career. The actor moved viewers to tears when he portrayed Flight Lt. Ajay Singh Rathod, who perishes when his MiG-21 jet malfunctions and crashes. When Madhavan brought up the role’s brief duration during a recent conversation about the movie with Tanmay Bhat and others, they all cracked up.

R Madhavan was asked if he had seen the second half of Rang De Basanti and if he knew what transpired during a conversation with Tanmay Bhat in June. All of the co-hosts, including Rohan Joshi, laughed before he could respond. R Madhavan joined in on their laughter and said, “wonderful question For me, Rang De Basanti was only thrilling for nine minutes.”

R Madhavan revealed to Film Companion in an old interview that he only needed eight days to prepare for the nine-minute role. I was supposed to play the part of Siddharth, but I couldn’t because I had long hair, so I ended up playing the part of the pilot. A major turning point in my life occurred when I realised that, despite only having a nine-minute appearance in Rang De Basanti, people still associate my name with the movie. And I think I only worked for eight days compared to these gentlemen who worked so hard for an entire year and a half. And I came to understand that how you portray a character and how that character is written and presented all affect how long that character will be remembered.

In addition, he claimed that it took him nine minutes to get everything right and ensure that the audience felt as though they had “lost someone they knew.”

For his YouTube channel, R Madhavan interviewed Tanmay in the run-up to the release of his film, Rocketry: The Nambi Effect. R Madhavan plays the lead role of aerospace engineer Nambi Narayanan in the movie. It centres on the scientist’s life and how he came to be falsely charged with espionage.

Advertisement
Related Topics:companylaughFeaturedinterestingminutesrangdebasantiremarkstanmayhat
Up Next