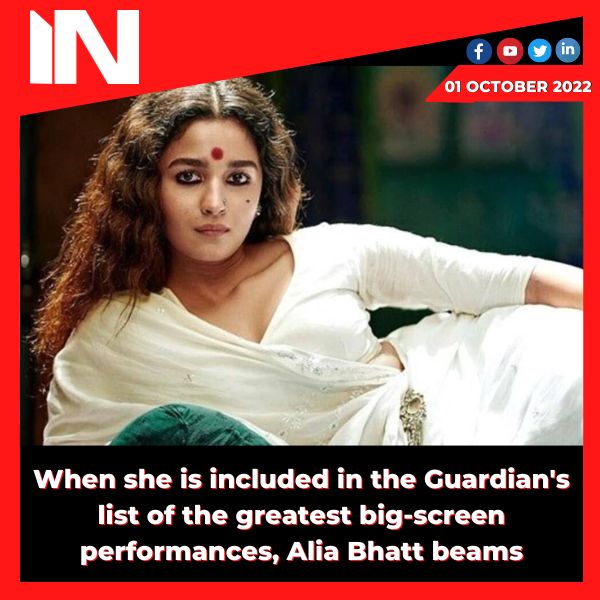 Actress Alia Bhatt from Bollywood is overjoyed that a prestigious international journal named her work in Sanjay Leela Bhansali’s Gangubai Kathiawadi as one of the year’s top performances. She responded to the news and posted it on social media.

The writers of The Guardian published a list of the greatest and worst big-screen performances in history. Legends like Tom Hanks, Cameron Diaz, Lupita Nyong’o, and Jennifer Lawrence were included with Alia. She portrayed a brothel madam who campaigns for sex workers’ rights in the movie.

According to the article’s author Mike McCahill, Alia “makes great emotional sense of a rollercoaster character development as the real-life figure of Ganga Harjivandas, the self-improving sex slave who became queen of Mumbai’s red-light district in the 1960s. Her incredibly expressive dance in the drum piece Dholida tells a story all by itself. It’s a thunderous three-minute accounting of everything this woman has won and lost, going from group triumph to personal misery.

Based on a chapter in Hussain Zaidi’s book Mafia Queens of Mumbai, Gangubai Kathiawadi was created. It depicts Gangubai’s journey, who was pushed into prostitution at a young age. As she advances through the ranks, she turns into a ferocious madam of the brothel and a political figure. Ajay Devgn, Vijay Raaz, Seema Pahwa, and Indira Tiwari all have significant parts in the movie.

When it hit theatres earlier this year, the movie was a success. Over 200 crore rupees were made worldwide. The movie was also one of the most watched Indian movies on Netflix, appearing in the top 10 list for six weeks in a row with 50.6 million viewer hours.

It received three stars from Shubhra Gupta of The Indian Express, who described it as “a spectacle made genuine by Alia Bhatt’s performance.” “What elevates it above your typical Bhansali spectacle is Bhatt’s willingness to go the extra mile: beneath the profanities, the binges on alcohol, and the pontificating on platforms, some of which come off as ‘acting,’ Alia Bhatt makes her Gangubai real. A piece of her review stated, “We are forced to experience the pain of the ladies whose lives are so constrained and who feel so abandoned by their loved ones that they can find companionship, rough and tumble it may be, only amongst themselves.

Alia Bhatt is enjoying a terrific year, first with Gangubai Kathiawadi’s popularity and then with the enormous success of RRR and Darlings. Brahmastra, her most recent release, also did well commercially. With Heart of Stone, the actor will shortly make her Hollywood debut.