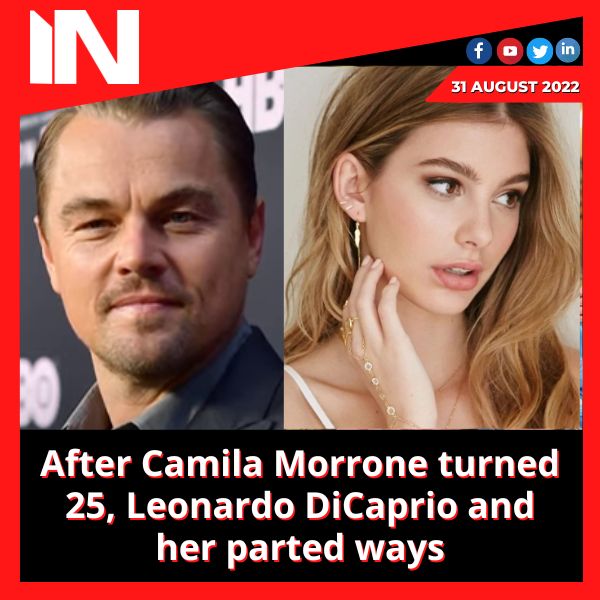 After more than four years of dating, Leonardo DiCaprio, 47, and Camila Morrone, 25, are apparently no longer together, according to a recent article. In 2017, the actor and model were first mentioned as a pair. Recently, pictures of Leonardo and Camila celebrating the Fourth of July (known as Independence Day in the US) together have surfaced. According to reports, the couple broke up soon after Camila turned 25 in June.

Although they kept their relationship a secret, Leonardo and Camila reached a significant milestone in their relationship in February 2020 when he took her as his date to the Oscars. Since it had been 15 years, Leonardo had not attended the Academy Awards with a girlfriend till the occasion. Additionally, the two appeared together in public at the US Open in September 2021.


According to a report in People, sources told the publication that Leonardo and Camila had broken up, but no explanation for the rumored breakup was provided. According to The Sun, Leonardo and Camila called it quits after June. Leo and Camila’s romance ended over the summer. They get along well and have no animosity. It simply came to a natural conclusion,” the person told the magazine.

Leonardo has dated a number of celebrities in the past, including Gisele Bundchen, Bar Refaeli, and Blake Lively; none of them were older than 25 at the time of their relationships with Leonardo. Camila was frequently mentioned in their relationship posts on social media. According to reports, someone even predicted that her romance with Leonardo would be “over” when you’re 25’.

Camila discussed her and Leonardo’s age differences in a 2019 interview with the Los Angeles Times, stating at the time, “Many couples in Hollywood and throughout human history have a significant age difference. I merely believe that everyone should be free to date whomever they choose.”

According to reports, Camila and her mother were seen in St. Tropez in August. Leonardo, meantime, was reportedly seen last week in Los Angeles with friends. Camilla will appear in the upcoming Daisy Jones and The Six Prime Video series. Martin Scorsese and Leonardo return for the upcoming movie Killers of the Flower Moon.

Inside of Jennifer Lopez and Ben Affleck’s ‘perfect’ wedding