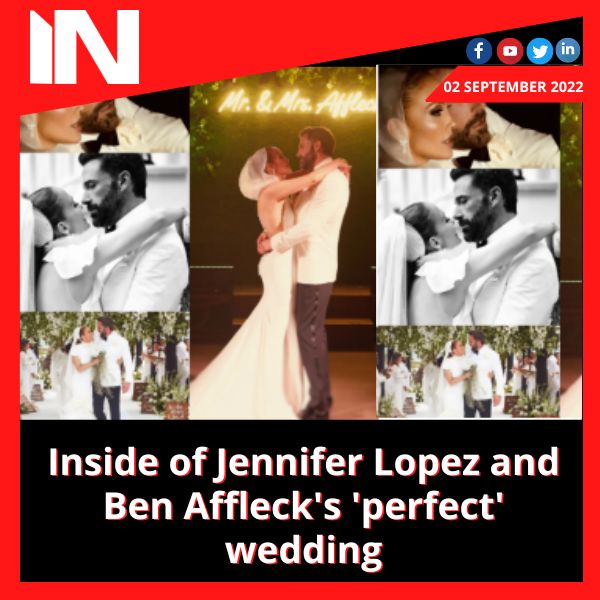 Jennifer Lopez, a singer and actor, just released fresh photos from her nuptials to Ben Affleck. Jennifer also talked about their wedding week and how things changed on August 20, the day they got remarried, in her newsletter On the JLo. I’ll quote, “This is heaven. right now. Jennifer added that Ben Affleck “also said that the night of our wedding celebration in his speech,” referring to the line from the movie Live By Night, “We’re in it now.” Jennifer recalled her response, saying that she found it to be “wonderful.”

Every day that week saw rain, according to Jennifer, but on Saturday, August 20, at 6:45 p.m., the sun finally appeared. She walked down the aisle “that would lead me toward the rest of my life” as her “closest family and friends sat.” Jennifer recounted how, “in this very house more than twenty years ago,” she and Ben discussed Marc Cohn’s True Companion as the ideal wedding love song. She admitted requesting Marc to perform the song as a surprise for Ben at their wedding.

“Later, Ben revealed to me that the song’s chords and seeing Marc Cohn both stunned him and gave him the ability to understand how the two pathways we had travelled eventually, inexorably, and wonderfully intersected. If I hadn’t been trying so hard to avoid tripping over my dress, I probably would have had many of the same ideas, but when I got near enough to see his face, it all made perfect sense. On that day, some old wounds were healed and the burden of the past was finally lifted “She composed.

They had both previously been married, and they weren’t quite children anymore, but nevertheless now seemed to be the only age that made sense, according to Jennifer. She also added, “Everyone has a unique life story, and we all follow various routes. Each person is unique. However, this came at the ideal time for us. Nothing has ever felt more right to me, and I knew we were finally “settling down” in the way you can only do when you understand loss and joy and are battle-tested enough to never take the important things for granted or let the silly, insignificant inconveniences of the day get in the way of embracing every precious moment.”

On July 17, during an unplanned visit to a Las Vegas wedding chapel, Jennifer and Ben exchanged vows. In April, after the two had rekindled their romance, Ben proposed to Jennifer. After starting to date in 2002, the pair became engaged in 2003, but they later called off their wedding and filed for divorce.

Chris Pine was not spit on by Harry Styles, according to the actor’s representative

After Camila Morrone turned 25, Leonardo DiCaprio and her parted ways