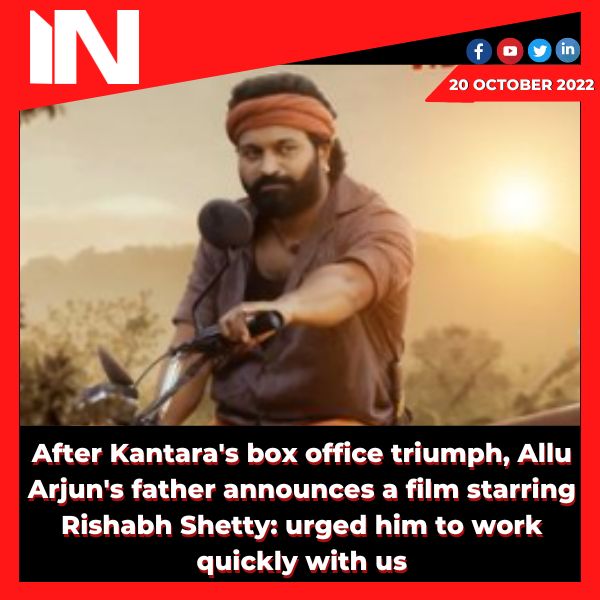 The September 30 premiere of the Kannada action-drama Kantara has resulted in almost Rs 175 crore in box office revenue in just 19 days. Allu Aravind, the father of actor Allu Arjun, will now collaborate with Rishab Shetty, the film’s director and star. Aravind revealed on Wednesday that he will be working on a project with Rishab under the Geetha Arts umbrella. Aravind announced the information during the Kantara success meet in Telugu.

Aravind was quoted as saying, “I’ve asked Rishab to shoot a film for Geetha Arts quickly, and he has immediately consented,” in a video that went viral on social media. Rishab stated during the same occasion that he was not currently planning to work on the Kantara sequel. Before starting work on his subsequent project, he continued by saying that he will take a brief break.

According to trade sources, the movie is anticipated to have a lifetime gross of around Rs. 250 crore at the conclusion of its theatrical run. The dubbed Hindi and Telugu versions of the film have also performed well, with a collective gross of over Rs. 30 crore in six days since release.

The novel Kantara, which means “mystical forest,” relates the tale of a local demigod named Bhoota who, in 1870, offers forest territory to a monarch in exchange for bliss. Years later, when the king’s son becomes envious and demands the country back, he perishes at Bhoota’s hands.

Trade analyst Trinath claims that Kantara is now the second movie, after the KGF series, to earn over Rs. 175 crore. “As the movie enters its third weekend, it has made over Rs 175 crore and is still playing at crowded theatres all over the world. Given the positive reviews the movie has received and the fantastic reception to its release in other languages, Kantara might easily surpass the Rs. 250 crore mark globally at the box office.

Trinath noted that the Kannada version alone has generated over Rs. 140 crore in revenue, while the dubbed versions have amassed over Rs. 30 crore in sales since their debut last week.

Khushi Kapoor received this counsel from Janhvi Kapoor: “Don’t date an actor because…