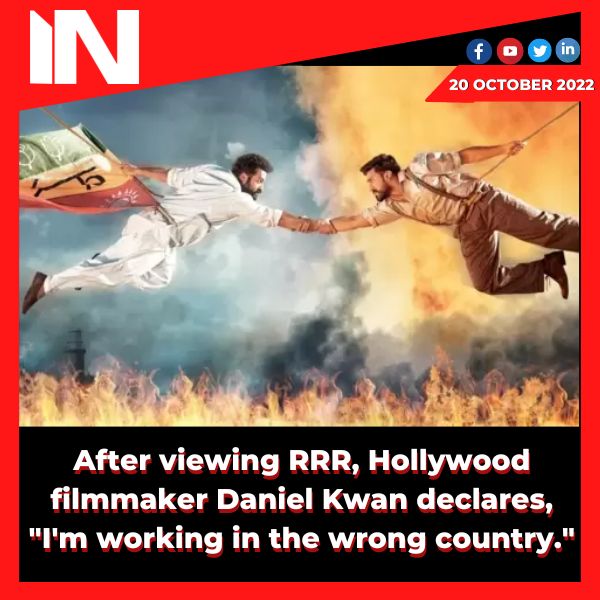 Daniel Kwan, the director of Everything Everywhere All at Once, lauded SS Rajamouli’s RRR and said it was “all heart-on-its-sleeve sincerity wrapped up in the most absurd over-the-top execution.” Daniel also stated on Twitter that his followers “weren’t kidding” when they expressed their admiration for the movie.

When Daniel tweeted, “I’ve finally crossed a few items off my list after a hectic year of work and travel: I did my taxes (I know, irony alert), and I watched RRR. HOLY COW, you guys weren’t joking. I feel like I’m working in the wrong nation every time I watch an Indian action movie.”

He further noted, “What really struck me was that RRR had all heart-on-its-sleeve sincerity wrapped up in the most absurd over the top execution, unlike many of the blockbusters we’re doing in the States that often have self aware, humorous characters stuck in self-serious filmmaking. Such a lot to adore.”

In response to his tweet, a fan created a collage with Michelle Yeoh in Everything Everywhere All at Once and Ram Charan in RRR sitting on Jr. NTR’s shoulder. The writer stated, “(Handshake emoji) EEAAO RRR. the top movies of 2022.” Daniel answered, “Raju on Bheem’s shoulders might be the better piggyback sequence of 2022, I humbly concede. Not that there is a contest.”

The meme showing a couple in bed with the woman thinking, “I guess he’s thinking of other ladies,” and the man lost in another idea was also altered by a fan. It was altered by a fan to indicate that the man was considering the RRR song Natu Natu. “Goddamn that musical number slaps so hard both my wife and I were thinking about it in bed,” said Daniel in response.

Daniel responded to a fan who questioned which of Ram and Jr. NTR’s characters he liked best: “related to Bheem more, but Ram was a hot mess. Those beard.” RRR is based on the lives of Alluri Sitarama Raju and Komaram Bheem, two real-life heroes and well-known revolutionaries. As Alluri Sitarama Raju, Jr., Ram Charan  NTR was seen as Bheem.

Movie review of Ammu: The terrifying drama starring Aishwarya Lekshmi is about a woman’s struggle against domestic abuse.