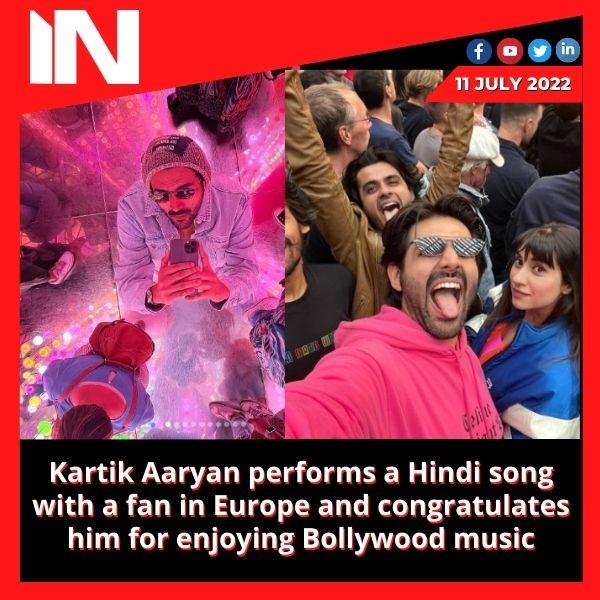 Kartik Aaryan had a great time while travelling over Europe and shared a tonne of photos and videos from his adventure. A man who was listening to an old Hindi song was also encountered by the actor, and he showered him with affection for “loving Bollywood melodies.” As Kartik and the man made a video together, the man also sung the song. Kartik was seen at the airport on Monday morning after arriving from Europe.

Kartik posted the video along with a number of other images to Instagram with the caption, “I’ve realised I’m busiest on my vacations.” In the video, Kartik meets a man who is singing the Naajayaz song Abhi Jinda Hu To Jee Lene Do while watching Kartik. He said, “Love you guys,” as Kartik joined him in singing the tune.

After taking photographs with him, the star told him goodbye by saying, “Love you for appreciating Bollywood tunes.”

The star showed his friends a number of other photos from his sightseeing excursion. Additionally, he went to an NFT display and gorged himself on a burger at a restaurant.

In the comments, a few of his followers lauded his photography abilities. “The best photographers are often busy on vacations,” an admirer wrote. But you’re a good photographer, someone else wrote.

On Monday morning, Kartik was seen at the Mumbai airport. He was wearing a yellow blazer and black casual clothing. At the airport, he also took selfies with admirers.

Days after his most recent film, Bhool Bhulaiyaa 2, finished a lengthy theatrical run with a worldwide gross of over 200 crore, Kartik took a flight to Europe. Bhool Bhulaiyaa 2 also features Kiara Advani, Tabu, and Rajpal Yadav under the direction of Anees Bazmee. After The Kashmir Files, it is the second-biggest Bollywood movie of the year.

In Shehzada, the actor will now appear opposite Kriti Sanon. He also has a movie in the works called Freddy.