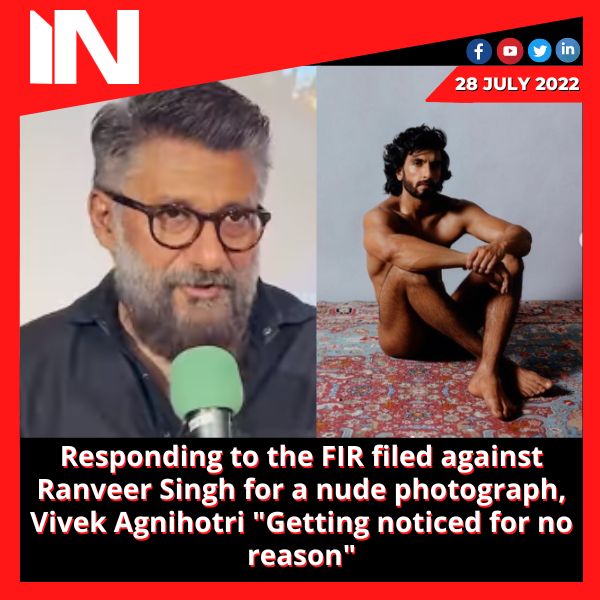 Following the filing of numerous FIRs against the actor for participating in an undressed photo session, Ranveer Singh’s nude picture shoot made national headlines. In response to a police complaint against the actor, director Vivek Agnihotri has called it “extremely foolish.” The filmmaker called it a “amusing situation” and questioned how Ranveer’s nude photos could possibly be hurting women’s feelings.

On July 21, images of Ranveer Singh from his Paper magazine cover photoshoot were released, and immediately afterward, comments from all corners began to flood in. Others criticised the actor for being too open, while others commended the actor for being “brave.” Additionally, Mumbai Police received two different FIRs for obscenity and hurting feelings against Ranveer. One of the grievances claimed that the actor had offended people’s feelings.

Vivek responded to the allegation by saying, “It is a really foolish FIR,” in a recent interview with Aaj Tak. This is such a funny case that is receiving attention for no apparent reason. The FIR states that the feelings of women are being damaged. Tell me, does it damage men’s feelings when there are so many photos of women in their underwear? This argument is so ridiculous.

Ranveer’s decision to participate in a nude photoshoot was further justified by the director, who said that the human body was the “most beautiful creation of God,” and whose most recent film The Kashmir Files was one of the biggest hits of 2022. People feeling outraged by a nude picture shoot, according to Vivek, is not a problem.

“In our society, human bodies have always been valued. The human body, in my opinion, is God’s most exquisite creation. What’s incorrect about that? Such things do not appeal to me. It exhibits really conservative thinking, which I oppose, said Vivek.

Actress Swara Bhasker previously referred to the FIR against Ranveer for his nude picture as “foolishness.” “Unbelievable folly and unemployment is widespread in our country,” Swara had written, quoting a tweet regarding the charges brought against Ranveer in the case. Swara responded to the discussion surrounding Ranveer’s photos a few days prior by tweeting, “Daily cases of injustice & tyranny in India, but certain.. our fury is reserved for @RanveerOfficial’s photos! I mean, really… ignore it if you don’t like it

Advertisement
Related Topics:againstfirnoticednudephotographranverrsinghreasonrespondingvivekagnihotri
Up Next