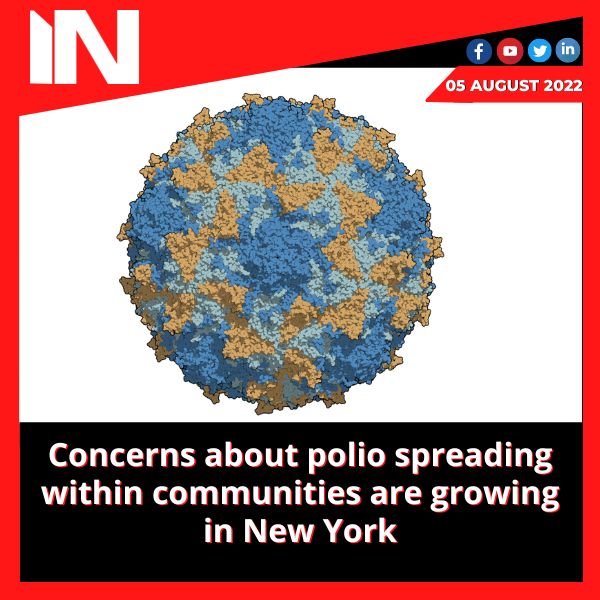 In light of fresh proof of potential “community spread” of the dangerous virus, New York state health officials issued a more urgent call Thursday for unvaccinated children and adults to get immunised against polio. Health officials reported that the polio virus has now been discovered in seven different wastewater samples from two adjacent counties north of New York City.

Only one person has so far tested positive for polio, an unvaccinated adult who was paralysed in Rockland County.

The state’s health commissioner, Dr. Mary T. Bassett, warned in a statement that, based on previous polio outbreaks, “New Yorkers should know that for every one case of paralytic polio observed, there may be hundreds of other people infected.”

The Department is treating the lone case of polio as just the tip of a much larger potential spread, coupled with the most recent wastewater findings, “She spoke. “What we already know is crystal clear: polio is still a threat in modern-day New York. In order to combat this situation, we must make sure that all adults, including those who are pregnant, and young children by the age of two have received the necessary immunizations. This is the only reliable defence that every New Yorker needs against this crippling virus.

The person with polio in Rockland County is the nation’s first known case of the disease in nearly ten years. The virus was also found in wastewater samples taken in nearby Orange County in June and July.

More than 20 years after vaccines were made available, polio, once among the most feared diseases in the country, was declared extinct in the US in 1979.

The majority of polio sufferers show no symptoms, but they can still shed the virus for days or weeks and spread it to others. Only a small portion of those who contract the illness experience paralysis. Around 5–10% of paralysed people die from the illness.

Although polio vaccination is mandated for all students in New York’s public schools, vaccination laws are occasionally not strictly enforced everywhere. Both Orange and Rockland counties are recognised as hotspots for vaccine resistance. By the time they turn two, 79 percent of children statewide have received all four shots against polio. That percentage is 59 percent in Orange County. The percentage is 60% in Rockland.

Given the low vaccination rates for this crippling disease in some areas of our County, it is alarming that polio, a disease that has been largely eradicated through vaccination, is now present in our community, according to Orange County Health Commissioner Irina Gelman. I beg all unvaccinated Orange County residents to get vaccinated as soon as medically feasible.”

Advertisement
Related Topics:communitiesconcernsgrowingnewyorkpoliospreading
Up Next