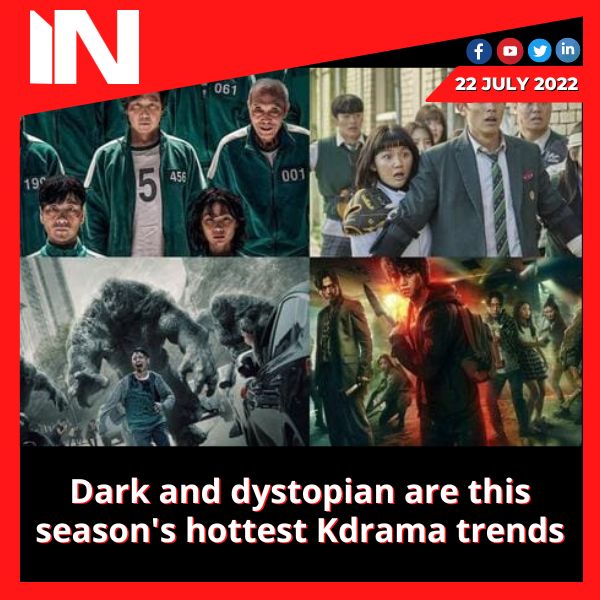 Although rom-coms have historically dominated the Kdrama market, the romance genre has never actually been the only one available. There is something for everyone, from historical dramas to thrillers. However, there has been an unmistakable shift since the emergence of streaming culture, which is perhaps connected to the pandemic: the rise of South Korean shows with darker themes. People around the world may have been searching for an escape from the pandemic, but they were also likely tired of the unrelatable happiness of traditional love stories, which is why dystopian programmes found a huge audience. Additionally, the enormous global appeal of programmes like Squid Game and Sweet Home gave rise to another feature that was previously unusual for Kdramas: the idea of seasons.

Several popular gloomy and dystopian series have only recently announced fresh seasons to enthusiastic public reception. Fans of Kdramas who are looking for an escape fuelled by adrenaline have a lot to look forward to.

The second season of Squid Game, the dystopian Kdrama genre’s largest global success story, has been approved. The fatal competition on the world-record-breaking show features a cash award for the final survivor. The Front Man (played by Lee Byung-hun) and Gi-hun (played by Lee Jung-jae), as well as maybe Gong Yoo, will return for season 2, while new characters include the killer doll’s “lover.”

However, there will probably be a long wait since season 2 might debut as early as late 2023, according to writer and director Hwang Dong-hyuk in an interview with Vanity Fair.

This popular programme has been renewed for not just one, but two more seasons! This action-packed programme is set in a world where people occasionally personify their own evil by turning into monsters. Along with actors Lee Jin-uk, Lee Si-young, and Lee Do-hyun, Song Kang will make a comeback to host the post-apocalyptic show. Actor in It’s Okay To Not Be Okay Oh Jung-se will be one of the brand-new cast members. The upcoming seasons will likely follow the survivors as they flee the monster-infested structure and the military’s preparations for the infected, as anticipated by viewers.

Hellbound is a dark fantasy (or horror, depending on who you ask) drama starring actor Yoo Ah-in. It takes place in a universe where demons summon sinners to hell in advance. The first season, which starred Park Jeong-min and Kim Hyun-joo in crucial roles, was brief yet dramatic and compelling. The cliffhanger from the final episode will probably be addressed in the upcoming season. The online series, which is directed by Train To Busan, is anticipated to receive a new season as well, according to Yonhap. Cast or a timeline have not yet been revealed.

This one is for zombie enthusiasts! In the movie All Of Us Are Dead, high schoolers are stranded and must struggle to survive amid a zombie apocalypse. To the pleasure of viewers, a new season of the show was announced last month, so the nightmare is far from finished. The actors Yoon Chan-young and Park Ji-hu are anticipated to reprise their roles in the forthcoming season.

This web series was maybe the first dystopian Korean drama to gain international notoriety. It is a terrific blend of zombie horror and a political time-travel thriller set in the 16th century. Major celebrities like Ju Ji-hoon, Ryu Seung-ryong, and Bae Doo-na starred in the series.

The highly regarded programme received a second season renewal along with a special side-sequel episode starring Jun Ji-hyun called Ashin of the North. According to the show’s creator Kim Eun-hee, there are enough concepts for more than three seasons. Expectations are high for a new season because South Korean content dominates the OTT space. According to rumours, the delay may have been caused by the busy performers’ schedules. Another spin-off, named Kingdom: The Crown Prince, was apparently in the works.

Advertisement
Related Topics:DarkdystopianFeaturedhottestkdramaseasontrend
Up Next

Fans predict that Nayanthara and Vignesh Shivan’s wedding documentary, which will soon be available on Netflix, “is going to be incredibly amazing.”