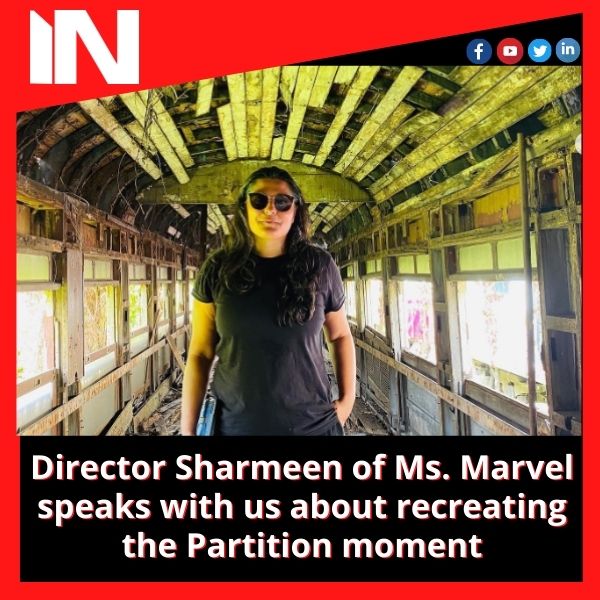 The first episode of Ms. Marvel, the Disney+ Hotstar series that introduces the first Pakistani superhero to the Marvel Cinematic Universe, features Kamala Khan saying, “It’s not really the brown girls from Jersey City who save the world.” The fourth and fifth episodes of the superhero series are directed by prominent social justice documentarians Saving Face, A Girl in the River: The Price of Forgiveness, and A Journey of a Thousand Miles by Pakistani filmmaker Sharmeen Obaid-Chinoy.

Young Kamala Khan (Iman Vellani) travels from Jersey City to Karachi in the fourth episode to learn more about her ancestry and newly discovered powers. The show dives into the agony of Partition by studying the tales of Kamala’s great-grandmother, a being from another realm who gave Kamala her special skills.

I chatted with Sharmeen through Zoom about the show’s enormous goals, its portrayal of diverse viewpoints, and its attempt to recreate Karachi.

Nearly a thousand extras were working on the set of the moment where we travelled back to 1947 when we were standing on the platform. There was a time on set when everyone on set couldn’t believe that we were able to recreate Partition and present this tale to this generation while Kamala was walking on the platform and listening to these snippets of talks. We felt as though we had been transported to 1947 at the time we were recording her crossing the platform. Each of us sensed the suffering those families were through, and it seemed as though we were watching history unfold.

With this show, I wanted everyone to fall in love with Kamala Khan’s family and desire to live their lifestyle, including eating the same foods, using the same slang, and listening to the same music. We wanted to show people the depth of our culture and lives, which few people outside of our immediate area are aware of. Weddings and festivals were the only things we tried to use to entice them. I’ll give you an example: When Kamala first arrives in Karachi, the food she tries and the instructions she requests all serve as an introduction to the city, its culture, and its residents.

Advertisement
Related Topics:directormomentmrmarvelpartitionrecreatingSpeaks
Up Next

Top 5 serious burns of all time, according to Deepika and Kangana, on Koffee with Karan