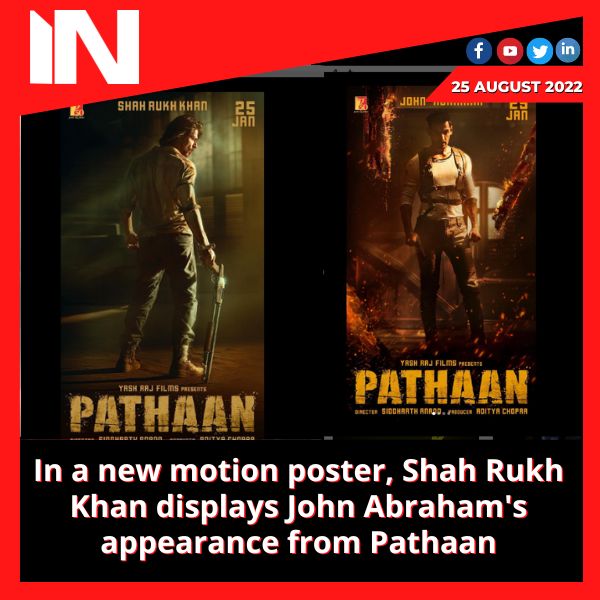 John is seen surrounded by blazing logs after it explodes. John stood inside a dilapidated chamber in the movie poster wearing a white T-shirt, black jeans, and a harness around his stomach. Shah Rukh shared the picture and added the description, “He plays it rough and is tough! In Pathaan, I present @thejohnabraham. On January 25, 2023, watch Pathaan with #YRF50 only in a theatre near you. releases in Telugu, Tamil, and Hindi. #5monthstopathaan, @deepikapadukone, #SiddharthAnand, @yrf.”

John posted the movie poster on Instagram as well. I’ll let my action do all the talking, part of his caption said. Additionally, Shah Rukh shared posters of John in several languages. Locked and loaded, he wrote. In Pathaan, meet @thejohnabraham.

After a four-year absence, Shah Rukh will return to Bollywood in the action thriller Pathaan opposite Deepika Padukone. The Siddharth Anand-directed movie is expected to be released on January 25, 2023, in Hindi, Tamil, and Telugu.

Shah Rukh unveiled Deepika’s appearance in the movie with a motion poster last month. He posted a picture of Deepika firing from a rifle while wearing a serious expression on her face to Instagram. She doesn’t need  a bullet to kill you!”

In addition to Pathaan, Shah Rukh will co-star with Taapsee Pannu in Rajkumar Hirani’s forthcoming movie Dunki. Alongside Nayanthara, he has the action thriller Jawan by filmmaker Atlee. The movie is scheduled to premiere on June 2, 2023.

John recently revealed the release date of his new movie Tara Vs. Bilal, which is set for October 14. The film, which was directed by Samar Iqbal, stars Harshvardhan Rane and Sonia Rathee in the lead characters. John is also working on the book Tariq, which was written by Ritesh Shah and Lalit Marathe. The movie is expected to premiere on August 15, 2023.