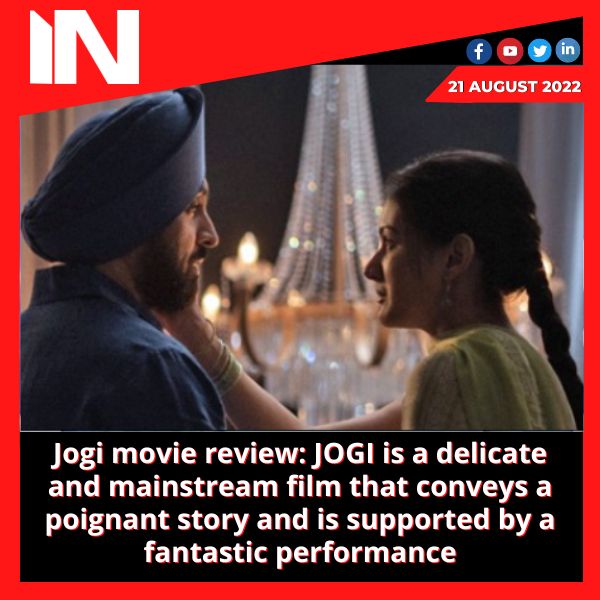 The year is 1984 and the Prime Minister of India is assassinated by her Sikh guards. As a result, members of the Sikh community start getting attacked in the National Capital. Tejpal Arora (Kumud Mishra), the MLA of Trilokpuri, decides to massacre Sikhs in his constituency. Tajinder is burned alive along with his shop. Jogi, his family, Heer and other Sikh residents of Lane no 6 take refuge in Gurudwara.

His friend, Kaleem Ansari (Paresh Pahuja), who runs a truck business, devises an escape plan.JOGI is one of the few films on the anti-Sikh riots in India. Ali Abbas Zafar and Sukhmani Sadana’s screenplay is simple and engaging. The flashback portion in the second half hampers the film’s impact.

Director Ali Abbas Zafar’s direction is neat. The riot scenes are well executed and the same goes for the emotional moments. The message of religious identity comes across convincingly. The film falters majorly in the second half involving Kammo (Amyra Dastur).

The finale is moving and the flashback portion is nice, but comes too late in the day. Diljit Dosanjh delivers a power-packed performance in JOGI. Kumud Mishra is great as the antagonist. Mohd Zeeshan Ayyub delivers a bravura performance as Kaleem. Arvinder Singh Gill (Jogi’s father), Charu Kumar, Samarjit Singh Mahajan and K P Singh are fair. JOGI tells a moving tale in a sensitive and yet mainstream manner and rests on the brilliant performance of Diljit Dosanjh. The weak second half dilutes the impact to an extent. Julius Packiam’s background score is one of the USPs that adds to the film’s thrill.

From RRR to Tumbbad and Dharm, India’s biggest Oscars entry snubs over the years