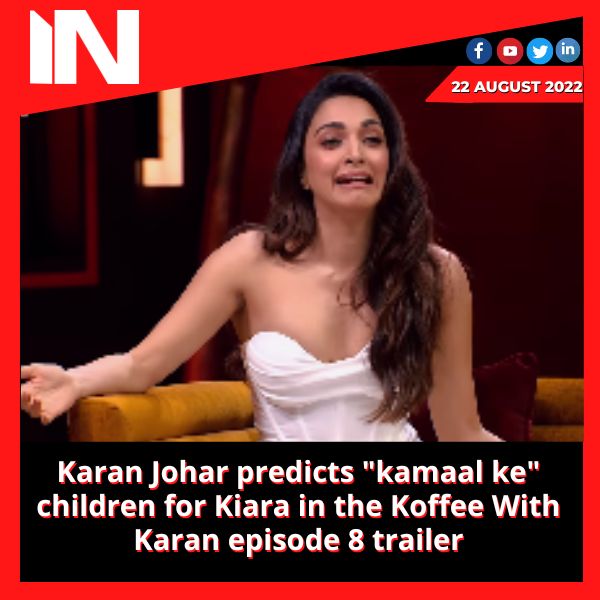 This week on Koffee With Karan, Sidharth Malhotra’s girlfriend Kiara Advani is ready to take over the couch from him. Shahid Kapoor and Kiara will both appear on the popular chat programme together.

The actors can be seen conversing with host Karan Johar about their co-stars and even the potential children that Kiara and Sidharth Malhotra might have in the video released by Disney+ Hotstar on Monday morning. Shahid was questioned by Karan about his sexiest aspect. Not visible to the camera at this time, he responded. Kiara also demonstrated the how Shahid Kapoor calls her when she’s playing Preeti Still from Kabir Singh. Shahid made fun of the fact that Sidharth had to additionally announce her name loudly.

Shahid responded cheekily when asked what he misses most about being single: “Apart from the women.” When Karan added, “Gorgeous,” Shahid remarked that Sidharth and Kiara were “such a wonderful looking couple.” The babies they have will be magnificent, Bachche kamaal ke hoge.

The last time, on Koffee With Karan episode 7, Karan made every effort to convince Sidharth and Kiara to disclose their relationship. A video recording of Karan grilling Kiara during the episode was provided to Sidharth. He questioned Karan, “Why did you ask her so many questions?” Kyu itna pareshan kia aapne Karan usko Sidharth responded, “You are set! ” after Karan stated that he had determined what he would do at the wedding. Let us also,” Vicky Kaushal said, furrowing his brows in anticipation of Sidharth eventually making it public. Finally, he did say, “Karan, let’s see. Everyone wants to work hard and have a fulfilling future and life. It’s good to know we have your approval.

Last year, Sidharth and Kiara collaborated on Shershaah. Since they began producing the movie, there have been rumours that they are dating.

Indian Matchmaking’s “Sima aunty” is made fun of by Vir Das: Indian parents will…