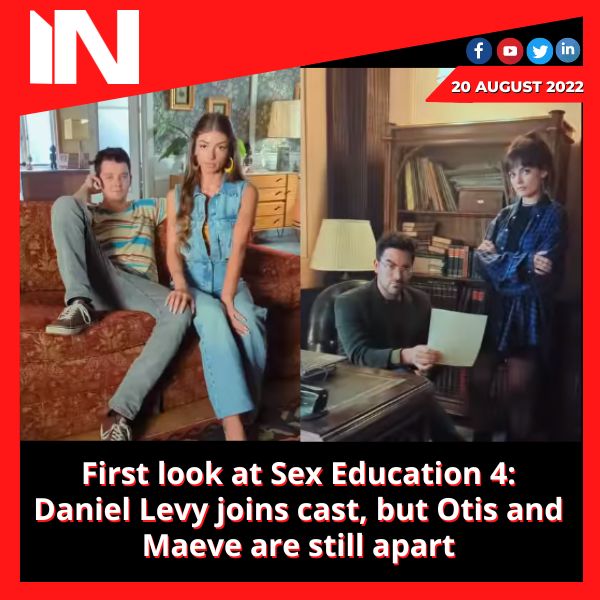 Finally, Netflix has provided information regarding the fourth season of the popular web series Sex Education. The Primetime Emmy Award winner Daniel Levy has joined the cast after the streaming service recently confirmed the renewal of the show. In a recent still, the actor-creator of Schitt’s Creek can be seen seated next to Maeve played by Emma Mackey.

Can’t think of a better announcement to start the long weekend than #SEXEDUCATION RETURNS FOR SEASON 4, Netflix captioned a brief teaser announcing the next Sex Education season. When the latter leaves, the video clip shows Otis (Asa Butterfield) and Ruby (Mimi Keene) relaxing together. Soon after the clip, Maeve can be seen standing next to her teacher (Daniel Levy).

Additionally, Netflix piqued viewers’ interest by posting a montage of Maeve and Otis’ complex relationship over the previous seasons. It remains to be seen whether they will reunite in the upcoming season. Better that they be together in S4, a fan stated in the comments. Another remarked, “Soo cute together.”

Variety reports that Daniel Levy will play Thomas Molloy, a well-known author who serves as Maeve’s Ivy League college’s US course professor. Otis and his best buddy Eric (Ncuti Gatwa) will be seen attempting to settle in at a new campus, Cavendish Sixth Form College, as Moordale Secondary closes.

According to the portal, there is daily yoga in the community garden, a strong emphasis on sustainability, and a group of kids who are well-known for being… kind? Jackson (Kedar Williams-Stirling) is still trying to move past Cal, while Viv (Chinenye Ezeudu) is completely baffled by the college’s student-led, non-competitive attitude (Dua Saleh). By enrolling in an Art A Level, Aimee (Aimee-Lou Wood) tries something new, and Adam (Connor Swindells) questions the value of traditional education.

Emilia Clarke of Game of Thrones is referred to by the CEO of Australian TV as a “short, dumpy girl”