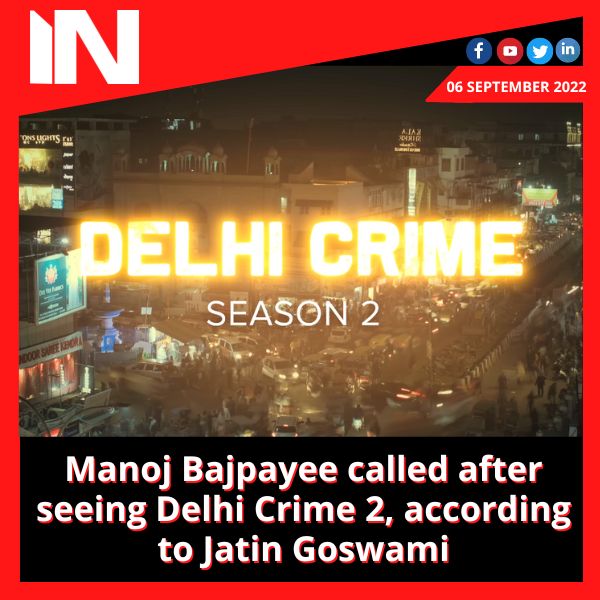 Actor Jatin Goswami is a proponent of quality over quantity, as evidenced by his work in Delhi Crime Season 2. He played Babloo in the Netflix series, one of the villains who terrified the audience with his gory actions. Jatin shared his finest compliment with Hindustan Times in an interview: “Manoj Bajpayee phoned me after the Delhi crime. It’s a big deal to receive a call from him. He valued my efforts.

Jatin was born in Haryana and later resided in Delhi. Like many others, he relocated to Mumbai and eventually pursued his goal. But it was unquestionably not simple. Despite getting little screen time, he nonetheless managed to contribute significantly to Delhi Crime 2.

“As an actor, you want to be connected to compelling narratives. You want to grow professionally and associate with people who are masters of their fields. You learn and have fun at work in this way. I worked with incredibly talented people in Delhi Crime and learned something new every day. I had no room for improvement.

In addition to being involved with projects where I got to work with people I always look up to, I have also been involved in Delhi crime. Be it Tigmanshu Dhulia, Ayushmann Khurrana, Manoj Bajpayee, Anubhav Sinha, Sharmila Tagore, etc. Looking back on his career, where he acted in movies like Anek, The Great Indian Murder, Babumoshai Bandookbaaz, and Hit: The First Case, he summarised, “It’s an actor’s dream.

Jatin regrets not having the opportunity to share the screen with Shefali Shah, the star of Delhi Crime 2, who is the woman of the moment. Sadly, I didn’t get to have any scenes with her. But I have always loved her work.

Actors frequently discuss the effects of playing a grey role. How much of it applies to Jatin? “It’s challenging in that you want to wake up every day thinking positively. But sometimes you have to put yourself in situations that most people wouldn’t want to be in as an actor in order to comprehend the decisions your character is making. Everything he does is motivated by love. When you are in love, sometimes you do anything.

Rajkummar Rao was Jatin’s batchmate at The Film and Television Institute of India, and his seniors were Vijay Varma and Jaideep Ahlawat. He underwent a casting process, and Mukesh Chhabra chose him for the show. Before he can consider himself a major actor, the actor believes he has a long way to go. His Instagram is still not verified.

He recalled an incident from The Great Indian Murder’s triumph party from two years prior, saying, “On the second anniversary of TGIM, makers invited me to a party in Mumbai. At the entrance to the venue, bouncers stopped me. My command was to “pass dikhao.” I didn’t know who to call or where to go to receive a pass. During this, Piyush Mishra suddenly appeared and spoke the words, “Are yaar tumhein kabse dhundh raha hu main.” It is “Bohot acha kaam kiya hain.” The bouncers immediately let me in.

Jatin’s next appearance will be in Gulmohar, Sharmila Tagore’s homecoming film. He said, “Next is Gulmohar starring Sharmila Tagore and Manoj Bajpayee,” as he was trying out several roles.

Sima Taparia is “horrified” to hear that Seema Sajdeh “likes women,” she says