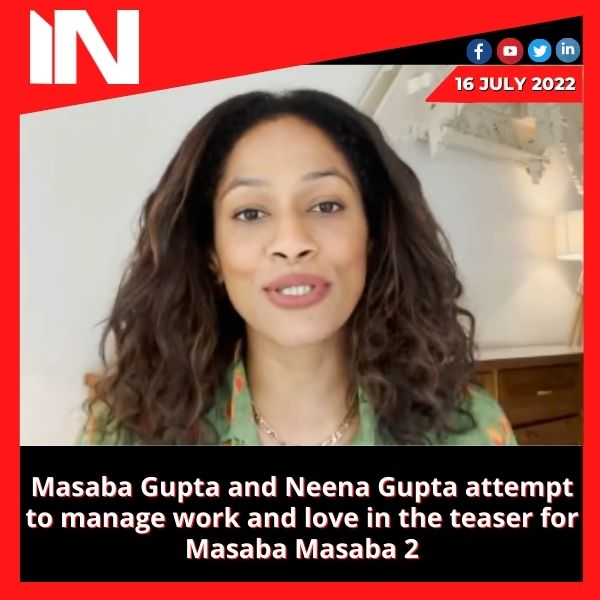 On July 29, Netflix will release Masaba Masaba season 2, bringing back Masaba Gupta and Neena Gupta. As they attempt to manage their job and love lives, the real-life mother-daughter team—who also portray mother and daughter in the web series—will encounter a new set of difficulties. On Saturday, the official trailer for the newest season of Masaba Masaba was released. She’s been a princess, a queen, and now it’s time for her to be a king, Masaba wrote in a caption for the photo she shared on Instagram.

In this lighthearted, fictitious look at Neena and Masaba’s life in fashion and movies, they portray fictionalised versions of themselves. Masaba Gupta, an actor-designer who portrays a fashion designer in the series, is shown striving for both love and work as she confronts fresh highs and new lows in the nearly two-minute clip. She makes the claim that she wants “to be the king” quite early on in the trailer. She even informs Neena that she has made the decision that she would no longer have any males in her life—just work.

The designer is attempting to retake control of her personal life while creating a brand-new collection and navigating new (and previous) love interests. Armaan Khera’s Fateh, her customer who flirts with her, is partnering Neil Bhoopalam’s Dhairya Rana, her investor-turned-love interest, in trying to win over Masaba’s affection. Masaba is creating the attire for his nuptials.

Neena is currently seeking an actor to play the opposite of her in a new programme in which she is the lead actor. Ram Kapoor enters. However, it appears that the two are involved in more than simply their jobs. Masaba advises Neena to get her hormones examined because she was acting “extremely thirsty” in a certain scene.

Sonam Nair is the director of the second season of the Netflix series. The new cast members are Kusha Kapila, Kareema Barry, and Barkha Singh in addition to Ram and Arman. Masaba Masaba’s first season, which made its Netflix premiere in August 2020, was well-received by both critics and viewers.

Advertisement
Related Topics:Attemptslovemanagemasabaguptamasabamasaba2neenaguptateaserwork
Up Next

Aahana Kumra: It’s encouraging to see female actresses in a range of roles on OTT