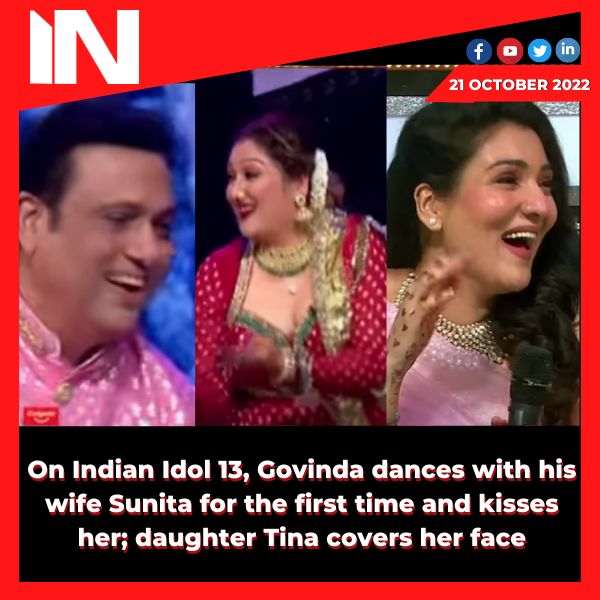 The forthcoming episode of the singing reality series Indian Idol 13 will feature special appearances from actor Govinda, his wife Sunita Ahuja, and their daughter Tina Ahuja. Govinda and Sunita could be seen applauding as they enjoyed a performance in a brand-new video uploaded by Sony Entertainment Television on YouTube on Thursday.

Sunita can be heard in the video saying, “Inhone aajtak mere saath dance nahi kiya (He has never danced with me)” while pointing at Govinda. The judges and crowd applauded as the pair then performed on stage. “I’ve been waiting for this moment for many years,” Govinda stated, “Main bohut saal intezaar kiya hun.”

After they danced on stage, Govinda also gave Sunita a hug and a kiss. Their dance performance was praised by the audience. Neha was seen laughing excessively as the video came to a close, and Govinda’s daughter Tina was seen covering her face with her hand. A admirer responded to the video by describing the couple as “lovely.” Someone another remarked, “Govinda is always a legend.”

On September 10 of this year, Sony TV broadcast Indian Idol 13. Aditya Narayan, a musician and actor, is the host for this season. The other two judges are Vishal Dadlani and Himesh Reshammiya, in addition to Neha.

“Babu” Sooraj Barjatya is referred to by Salman Khan as his “best director”: One of the kindest people I have ever encountered.