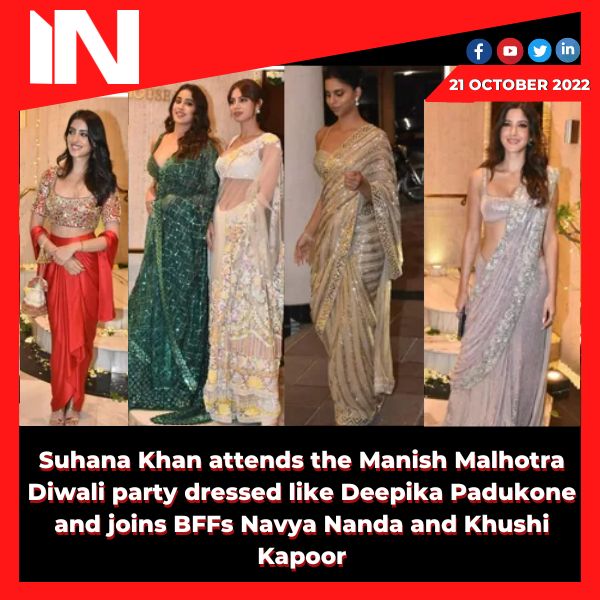 Ananya Panday, Navya Naveli Nanda, Shanaya Kapoor, and Janhvi Kapoor, along with Suhana Khan and Khushi Kapoor, who will make their acting debuts in Zoya Akhtar’s The Archies, attended Manish Malhotra’s Diwali party. Except for Navya, Jhanvi, and Ananya, they were all dressed in sarees.

For the party, Suhana chose a sequined golden beige saree. Her hair was pulled back into a bun. However, several of her followers on social media noted that she was having trouble walking while wearing the outfit and heels. Suhana, who will play Veronica in The Archies, is the daughter of Shah Rukh Khan and Gauri Khan.

Suhana’s fans thought she resembled Deepika Padukone when a paparazzi posted a video of her appearance on Instagram. “Next Deepika Padukone,” someone referred to her as. Someone else remarked, “She looks like DP.” Another admirer remarked, “For a while I thought it was Deepika.” There was also a comment that said, “Just adore how classy she carries herself. Her radiance and her calming demeanour. I sense that she has been raised so well.

Alongside Suhana, Khushi Kapoor will also be making her film debut as Betty. She wore a white sheer saree to the party as well. Jhanvi Kapoor, an actor, joined her wearing a green lehenga. Jhanvi is the first friend in the group to start acting in movies, and she will appear in her father’s production, Mili.

In a sequined saree, their cousin Shanaya Kapoor also joined them. She had experience working as an assistant director on the Gunjan Saxena: The Kargil Girl sets of Jhanvi. She will make her acting debut in the somewhat postponed Bedhadak by Karan Johar.

Ananya Pandey posed with Aditya Roy Kapur outside the venue while wearing a black and white outfit for the do. In addition, they were matching in black. Ananya most recently appeared in the movie Liger with Vijay Deverakonda, but the movie did poorly at the box office.

As her daughter Ziana recovers from dengue, Charu Asopa posts a photo of her from the hospital, writing, “Had a really terrible time.”

On Indian Idol 13, Govinda dances with his wife Sunita for the first time and kisses her; daughter Tina covers her face.