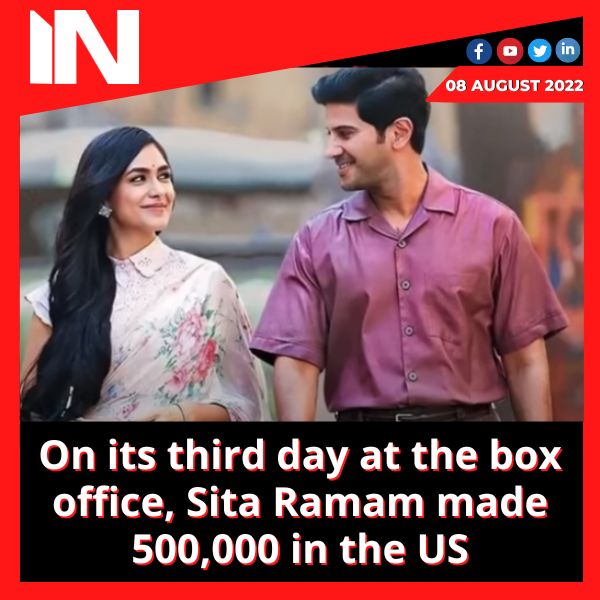 Sita Ramam, a Telugu period romantic drama starring actor Dulquer Salmaan, managed to rock the ticket counter in the US by grossing half a million in its opening weekend despite a slow domestic start on release day. The Hanu Raghavapudi-directed movie made about 10 crore rupees in its first weekend in India. According to trade sources, the movie had a sluggish opening weekend but quickly gained traction thanks to overwhelmingly positive reviews and word-of-mouth.

Dulquer plays a lieutenant officer in the Indian Army in Sita Ramam. The setting for the story is the Kashmir of the 1960s. Mrunal Thakur, Rashmika Mandanna, and Sumanth are also featured in the movie. Additionally, Tamil and Malayalam dubs and releases were made.

The movie’s US distributor revealed a poster that revealed the movie had earned more than $500,000 worldwide. The message said, “#SitaRamam is currently worth $500,000 in the USA. Timeless blockbuster in every way, receiving rousing cheers from movie fans.”

According to market analyst Trinath, the movie’s Friday box office performance was sluggish. He did, however, confirm that it gained momentum following a fantastic response on day two. “Sita Ramam showed a tremendous increase in footfalls thanks to excellent word-of-mouth after a sluggish start on the first day. The movie made about 10 crore rupees in its first weekend in India, according to Trinath.

The general consensus on Dulquer’s performance in the movie has been very positive. Dulquer said he accepted the movie at a point in his career when he decided he wouldn’t do any love stories at the premiere of the movie’s trailer. “Everything about this story felt so timeless and epic when Hanu sir first told it.

Advertisement
Related Topics:boxFeaturedofficesitaramamthirdUS
Up Next

Review of the film Kaatteri: This scary comedy has passed its prime

Kajal Aggarwal will return to acting after her first child