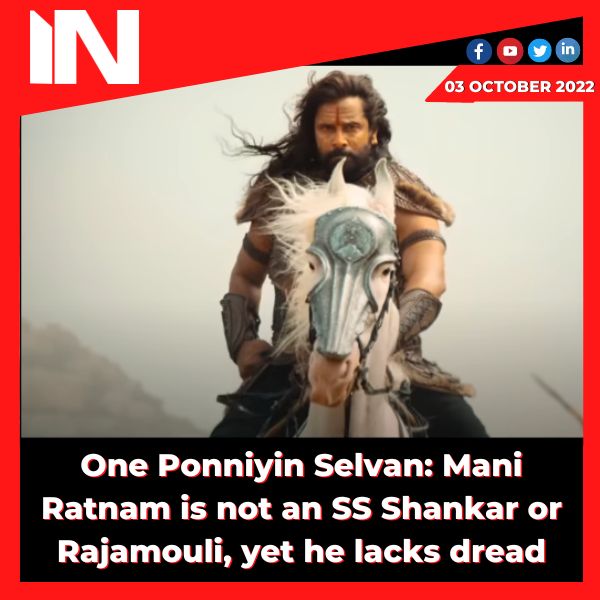 Ponniyin Selvan: 1 was Mani Ratnam’s long-cherished dream, which he tended to for approximately 40 years. And ultimately, when he brought the epic tale to life on the big screen, one is left to wonder what went through his mind when he first saw the finished product. Did he enjoy the show or was he silently berating himself on minor irritations that we would not even notice? Now that his magnum effort is in the hands of the viewers, what is going through the mind of this brilliant and one of the most sincere directors in Indian cinema? PS: The film 1 represents the realisation of the dreams of a great number of Tamil cinema’s greatest thinkers.

Mani Ratnam has treated this chance with the utmost respect by putting on the most respectful performance of this movie.

Shankar and SS Rajamouli are in a different league than Mani Ratnam. He can only go so far when it comes to making his movies “commercial.” He seems to be avoiding crossing an unseen boundary while caving to the crowd. He is one of a select group of Indian filmmakers who has achieved the distinction of mastering the technique for balancing art and commerce in blockbuster films. However, as Mani Ratnam grew older, he began to skew more toward the arts than toward business (perhaps because of Iruvar), which tipped the scales out of balance.

Without a doubt, PS: 1 contains several moments that, in the hands of another director, would have been fully utilised to bring spectacle to the general public. But he wasn’t. He made sure that Kalki Krishnamurthy’s epic drama wouldn’t be dishonoured by his big-screen adaptation.

This movie was not written by Mani Ratnam as a traditional Indian tentpole. It resembles seeing a Denis Villeneuve movie in certain ways. Budget, size, and star power are all enormous. But it doesn’t have the same exhilaration that we typically get, example, from watching a comic book movie. The way the story develops gives off a tremendous sense of tranquilly.

He doesn’t go through a character’s development in a scene or a protracted monologue. He is revealing the minute character changes so that we may realise that there is more to them than meets the eye.
For instance, Nandini, played by Aishwarya Rai Bachchan, is reputed to be as dangerous as a snake. Mani Ratnam has the option of taking the simple route and capitalising on Nandini’s perceived malice in order to make it simpler for us to choose a side. You understand that the majority of us always end up rooting for the “good people.” Instead, he pulls off a trick and uses a few montage images to reveal some of Nandini’s tragic past.

In order to bring down the Chola kingdom, Nandini uses deception on several different levels. According to popular belief, she is the antagonist of the narrative. To be honest, though, Nandini is more guilty of sins committed against her than by those who are working to bring about Sundara Chola’s clan’s demise. She was expelled from Thanjavur when she was very young for falling in love with Aditha Karikalan, the successor to the throne (Vikram). Later in life, despite her repeated pleas for mercy, her alleged lover Veerapandiya is mercilessly executed right in front of her eyes. She has good reason to want to exact revenge on the Cholas.

Trisha’s Kundavai is another. She gives off the impression of being an intelligent, kind, and political savvy individual, but she harbours strong prejudices. “We were unaware of Nandini’s ancestry. Aditha is conscious of her part in depriving Kundavai of the life he desired with Nandini and understands that he could never have permitted her to become the queen.

There’s also this pivotal moment in life that was nicely captured. Aditha pursues Veerapandiya as she flees into the jungle in search of refuge after defeating the Pandya army. His competitor is located by Aditha at a hut in the middle of a forest. The picture he sees when he kicks open the door rewires every cell in his body, transforming him into a murdering machine.

Aditha observes Nandini caring for Veerapandiya, who is severely hurt (the exact circumstances are yet unknown). For those who haven’t read the five books, at least. Aditha was committed to carrying out Veerapandiya’s warrior code by killing him. But he wasn’t a warrior when he struck Veerapandiya with the fatal blow that would kill him. He was just a frustrated lover who couldn’t endure to see the woman he loved being held by another man. His murder of Veerapandiya was a selfish and dishonourable act rather than an act of valour or responsibility. He may be aware of this in his heart, which is why he flees from all the comforts of a monarch in the direction of anguish, agony, and death.

In the annals of contemporary Indian tentpole films, Mani Ratnam’s handling of PS:1 is groundbreaking. He is rethinking a high-budget spectacle’s meaning and rewriting its syntax. To keep the audience interested, they don’t always need to be too action-packed, which might be mindless at times. The audience can be kept interested without things blowing up every ten minutes. In an attempt to be lyrical, Mani Ratnam wants to remind us of the benefits of delaying gratification.

Sona Mohapatra criticises Farhan Akhtar for not denouncing Sajid Khan’s presence in Bigg Boss 16: ‘You know this man and the others personally.

Alfaaz, a Punjabi singer, was assaulted in Mohali and hospitalised.