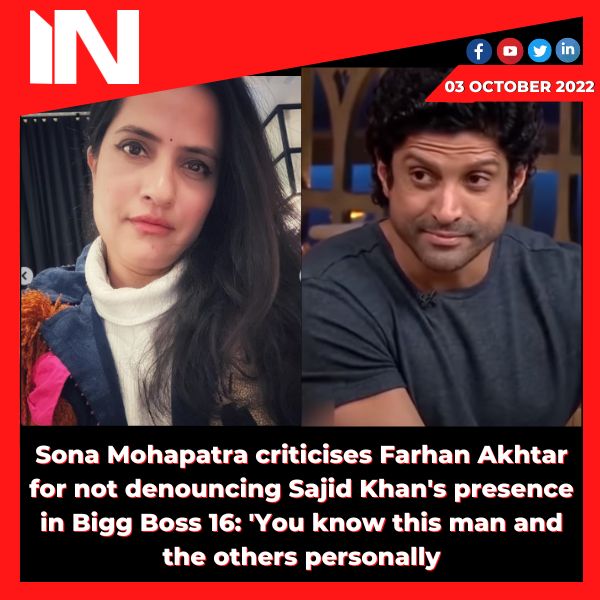 Many people are incensed by filmmaker Sajid Khan’s participation on Bigg Boss 16. Salman Khan welcomed Sajid, who has been accused of sexual misconduct by numerous women during the #MeToo movement, into the Bigg Boss House. Sona Mohapatra, a singer who is known for speaking out on contentious subjects in the business, issued a strong statement denouncing the participation. Farhan Akhtar, the leader of the organisation Mard, was singled out by her and questioned about his silence.

“This is #SajidKhan, now on a reality TV show,” Sona added. Then there is #AnuMalik, who is a judge on a children’s music reality TV series. Kailash Kher TV celebrity judge. MANY, MANY women in the #IndiaMeToo movement called them out. The executives of Indian TV stations are a sad and twisted bunch.

She sent Farhan Akhtar a message saying, “Dear @FarOutAkhtar, you front an organisation named MARD. You personally know this individual and a great number of the others. Only speak up or stand up when it’s advantageous or profitable to virtue signal for “our cause,” not right now. Giving starts at home.

The free publicity would make Sona’s marketing and creative teams “chuckle ghoulishly,” she continued. Sleep comfortably at night dancing on your conscience’ graves, she said.

Upon entering Bigg Boss, Sajid Khan avoided discussing the #MeToo allegations and instead claimed that “his hubris” was to blame for his demise. He told Salman Khan in-depth details about how his credit for Housefull 4 had been “stolen.” I worked on the movie up until the night (when he was charged with harassment), and then I stopped working on it the next morning. It was taken away from me that I had credit in the movie. Nevertheless, Salman Khan gave him a warm welcome and vowed not to favour him despite their closeness.

Shehnaaz Gill also gave Sajid a lot of support, which infuriated her followers. Shehnaaz had given Sajid a video message stating, “Hi Sajid bhai, I am extremely delighted for you. You are going inside the Bigg Boss house. Just go all out on the reality show the same way you always made the audience laugh on television and with your writing. Just be friendly to everyone and refrain from engaging in conflict. Just have fun and be yourself. Rock it, bro. You have my backing. Sajid Khan has also received the support of Kashmera Shah.

Meanwhile, many people posted the allegations against Sajid made by numerous women on social media and called out everyone worried about his participation in the reality show. Since the start of the programme, Sajid Khan has become popular.

Tiwari, a suspenseful web series, will be Urmila Matondkar’s digital debut; it is “An emotional mother-daughter story.”

One Ponniyin Selvan: Mani Ratnam is not an SS Shankar or Rajamouli, yet he lacks dread