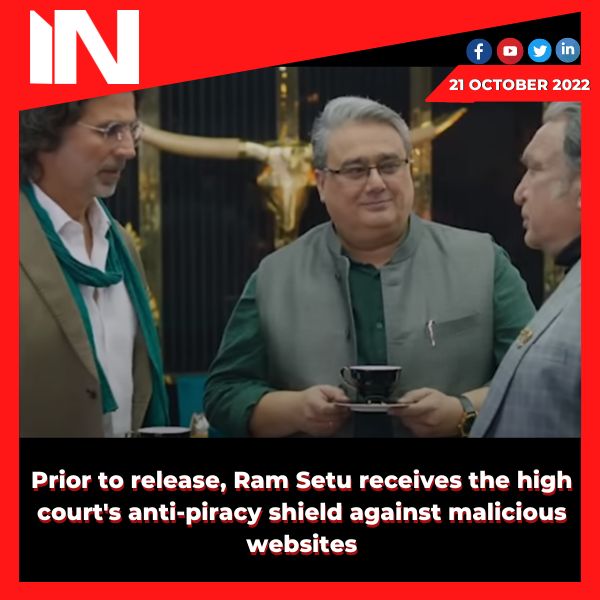 The Delhi High Court has banned 23 “rogue websites” from disseminating, hosting, streaming, retransmitting, displaying, and downloading the upcoming film Ram Setu. The court argued that piracy must be stopped and that a tough approach must be used in dealing with it.

In a ruling dated October 18, Justice Jyoti Singh stated that the producer, Cape of Good Films, and the screenwriter had established a presumptive case for the granting of ex parte ad-interim relief due to the significant outlays made by the filmmakers.

23 video sharing websites that are well-known for providing users with download links to movies and web series were listed by the producer.

This court prima facie agrees with the plaintiff that if the rogue websites communicate the film in any way, on any platform, concurrently with the theatrical release of the film on October 25 or in its close proximity thereafter, it would seriously harm the plaintiff’s interest, both financially and legally. This court cites the plaintiff’s investments in the production and promotion of the film as well as the exclusive right vested in it under the provisions of the Act.

The producer filed a motion with the court through attorney Shyel Trehan asking for an injunction “against 23 rogue websites” that, according to the producer, are vehicles for infringement whose entire business model is built to give the general public unauthorised access to intellectual content.

According to the complaint, it is standard practise for films to initially be released for theatrical presentation before being made available for watching on various platforms. However, the websites create unauthorised copies and make them accessible to the public for viewing, downloading, and transmission virtually simultaneously with the theatrical debut of the movie, according to the complaint.

The plaintiff anticipated that these websites would distribute illegal copies of the movie on various websites, which would negatively affect their business and devalue the movie in addition to violating their copyright.

Despite recent triumphs, Shefali Shah is still looking for decent roles: “Now people say we cannot go to her with…”

Review of the third season of Tripling: This Sumeet Vyas production is a pleasant, energising emotional roller coaster.