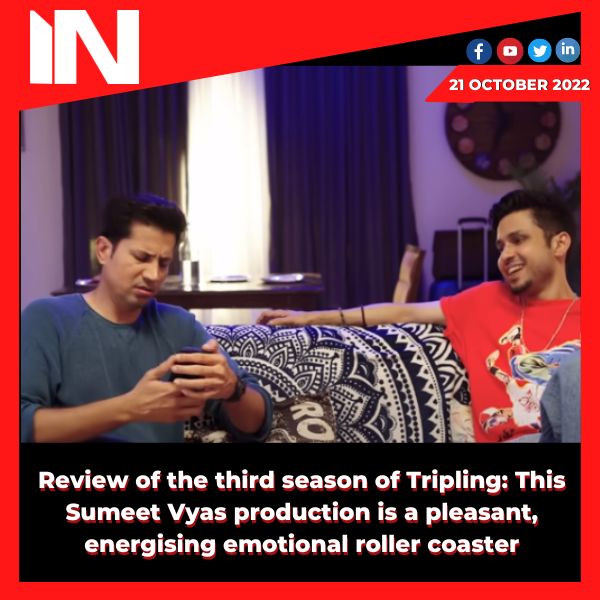 With a new season, Tripling and the trio of on-screen brothers Chandan, Chanchal, and Chitvan are back. This one is more of an emotional roller coaster than the one it is renowned for, which has unexpected twists, amusing scenarios, and comedy. The ZEE5 series proves to be an emotional eye-opener that strikes the emotional chord in unexpected ways as the siblings try to deal with the new issue in addition to their own ongoing problems. For a change, this one can be confidently suggested as a family-friendly film that is best enjoyed with one’s parents, siblings, or young children.

Lead actor Sumeet Vyas takes control of the show once more as a co-writer after two seasons of success helped him build a fan base. In the midst of their individual worlds being rocked by the news that his parents are intending to separate after 36 years of marriage, he reunites with his siblings Chanchal (Maanvi Gagroo) and Chitvan (Amol Parashar). They quickly fly to their family home in the hills to have the conversation with their parents and explain their decision to end everything. To convince their kids and the audience to comprehend their decision to separate, it takes five episodes, a jungle journey, and a high-pitched pep talk in the climax.

The programme also serves as a sobering reminder to the Y generation that while they aspire to live independent lives free from conventional attitudes, are they really prepared to deal with their parents’ odd thoughts or decisions? Are grandparents expected to merely smile in family photos and wish the children well when they make their own decisions? The parents of the siblings show people their age and the present generation that living until death is not the only goal of life that living forever for the happiness of the children is not. Kumud Mishra and Shernaz Patel portray a nearly perfect pair who are good parents who barely ever question the choices their independent children make. But if the same children expect them to be together just for the sake of them, they do not shy away from setting the record straight.

Though they are relatively few in quantity, the show nonetheless features new situational humour and humorous situations, staying loyal to the Tripling premise. Without falling short, Kunal Roy Kapur provides enough to keep the presentation fun and exciting. Additionally, he gets to play the role of the hero in the dramatic finale. The siblings continue to communicate with one another as usual during this season. This time, Amol Parashar emerges as a revelation since he is not in the mood to make crude jokes and is instead dealing with the sorrow of being apart from a child who is not even his own blood.

With a strong amount of humour and a family-friendly theme, the third season of Tripling can be safely compared to other popular family comedies like Gullak. The series also demonstrates that if the substance is worth the wait, the length of time between instalments may not matter. Even though they appear to be getting older and more mature, the three siblings are still closer than ever even after three years. Don’t overlook how Kumud Mishra and Shernaz Patel’s on-screen chemistry melts hearts; they are among the underappreciated group of middle-aged actors we can’t get enough of.