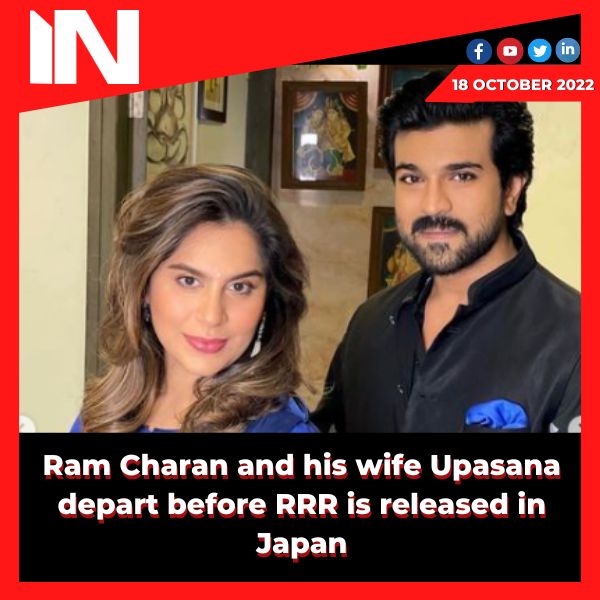 In order to promote RRR, actor Ram Charan, his wife Upasana Konidela, and their dog Rhyme took a chartered trip to Japan on Tuesday. On social media, a photo of Ram Charan taken at the airport has surfaced. In addition to Jr. NTR and director SS Rajamouli, Ram Charan will appear in pre-release advertisements for RRR, which opens in Japan on Friday, October 21.

RRR, which earned over 1000 crore ($1 billion) throughout its theatrical run and received widespread acclaim for its thrilling action, stirring acting, and lavish production values, is getting ready for a significant release in Japan.

A tweet from the RRR page’s official account in July stated that the movie would be released in theatres nationwide.

RRR is a fictional story based on the lives of Alluri Sitarama Raju and Komaram Bheem, two well-known rebels who lived in the pre-independence era of the 1920s. Ram, Jr., was portrayed by Ram Charan. Tarak, aka NTR, was portrayed as Bheem.

The movie, which had a budget of roughly 300 crore, outperformed only Rajamouli’s own Baahubali trilogy in terms of box office take.

The Telugu original, as well as variants in Tamil, Kannada, Malayalam, and Hindi, are all available on ZEE5, while the Hindi-dubbed version of RRR is available on Netflix. It was recently revealed by data from Netflix that it was the most watched non-English movie on the platform worldwide.

RRR was re-released in numerous US cities during the past few months.

The movie was recently shown at TCL Chinese Theatre, where it received a roaring reception from the audience. 932 seats in the theatre were completely sold out in about 20 minutes, according to a Deadline report. The movie made $21,000 from the single showing, bringing its total box office revenue since its re-release to $221,156.

Kangana Ranaut posts pictures of herself in white and claims that what a woman chooses or chooses not to wear is solely her business.

Yo Yo Honey Singh: I once tried acting, but I was awful at it and it’s the hardest job there is.