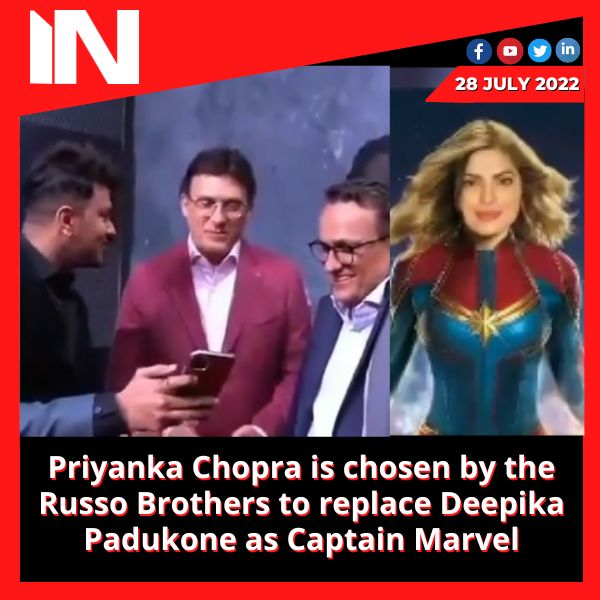 Priyanka Chopra is a friend of the Russo Brothers, and they wouldn’t prefer Deepika Padukone over her. The director team is putting on Citadel, Priyanka’s first web series. They choose Priyanka without hesitation when asked to choose between Deepika and Priyanka for a new Captain Marvel.

A video from the most recent press conference for The Gray Man, directed by The Russo Brothers, in Mumbai, featuring Priyanka and Dhanush, was posted on Priyanka’s Instagram fan page. When asked to choose between Priyanka and Deepika Padukone to play the role of the new Captain Marvel, they candidly admitted, “We have to pick Priyanka. Huge, huge fans are what (we) are. We have a great friendship. We’re engaged in a project.

In their interviews, The Russo Brothers have consistently lauded Priyanka. Joe Russo stated of Priyanka last year in an interview with IndianExpress.com, “She’s a fantastic star. I mean, she’s been fantastic, in my opinion. A table read for the performance was recently held a few days ago, and it was excellent.

Captain Marvel’s mid-credits scene, in which the title character meets the Avengers, was directed by Anthony and Joe Russo. In the 2019 movie, Brie Larson portrays Captain Marvel.

Priyanka finished filming Citadel a few weeks ago. There isn’t anything like Citadel on television, in my opinion, she noted in December of last year when speaking with Collider about the programme. Extremely large in scope, with intricately choreographed action and stunts, but also a drama with heart. I believe there is currently nothing on TV that is genuinely similar to that, which is one of the main reasons I was so motivated to make it. You understand that doing anything for several episodes is a commitment.

Hollywood movies Ending Things and It’s All Coming Back are Priyanka’s upcoming projects. She will also appear in the Hindi movie Jee Le Zaraa, directed by Farhan Akhtar and starring Katrina Kaif and Alia Bhatt.

Advertisement
Related Topics:brothercaptainmarvelschosendeepikapadukonePriyankachoprareplacerusso
Up Next

In the motivational anthem Liger song Waat Laga Denge, Vijay Deverakonda offers his voice to give you a rush of energy

Responding to the FIR filed against Ranveer Singh for a nude photograph, Vivek Agnihotri “Getting noticed for no reason”