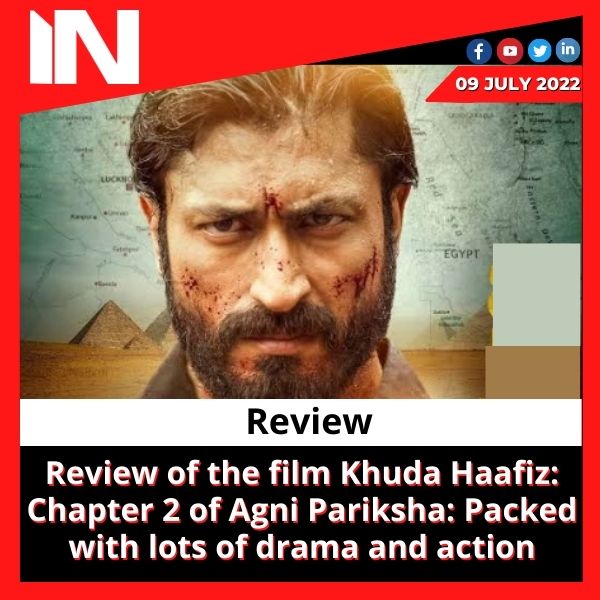 Nargis and her husband Sameer return to Lucknow after being kidnapped and raped in Noman and making a failed attempt to put their lives back together. They experience a brief moment of joy when they adopt Nandini, an orphan. When Nandini is the victim of a horrible incident, Sameer goes on the quest for the perpetrators in order to exact retribution.
Review: In the opening scenes of Khuda Haafiz, the follow-up to the action thriller from 2020, Sameer (Vidyut Jammwal) and Nargis (Shivaleeka Oberoi) are still dealing with the trauma of the latter’s kidnapping and gangrape in a fictitious nation named Noman. Despite the fact that Nargis is still emotionally damaged and resentful, she decides to adopt Sameer’s friend’s five-year-old orphaned niece, Nandini, following a therapy session. Their joy, however, is fleeting because Nandini is abducted and suffers as a result of a heinous crime.

What happens next is typical of a Bollywood revenge drama: a violent hero going after the criminals in vigilante fashion, a power manoeuvre by the affluent, spoiled boy’s grandmother (a ubiquitously nasty Thakur played by Sheeba Chaddha), getting rid of the key witness.

The film is of the highest calibre cinematically, despite the fact that the subject is anything but original and that the treatment frequently suffers from sensationalism. Faruk Kabir does a good job of running the show as the director, while Jitan Harmeet Singh works effectively with him as the cinematographer. However, it should come as no surprise that the action is first-rate, particularly when Sameer confronts Jaiswal, a jail bully who has been hired to kill him. Undoubtedly, it’s among the most memorable scenes.

As a hero, Vidyut gives a strong performance, demonstrating his unpolished action skills and engaging in a lot of hand-to-hand combat. Nargis, played by Shivaleeka, is convincing as she angrily reprimands her husband whenever he tells the therapist (Rukhsar) that everything is OK or acknowledges that she isn’t ready to take care of a child. However, it is difficult to comprehend how rapidly she recovers and everything returns to normal. It also seems a bit far-fetched that Thakurji would take advantage of her daughter-in-law in the subplot. Some scenes may be too graphic and unsettling for those who have trouble handling large amounts of blood and gore.

Overall, Khuda Haafiz 2 is entertaining because of the intense action and the moving plot. Although the plot is still predictable, the drama will keep you interested.

Review of the film Titu Ambani: A dull and dry family drama

Doctor Strange In The Multiverse Of Madness Movie Review