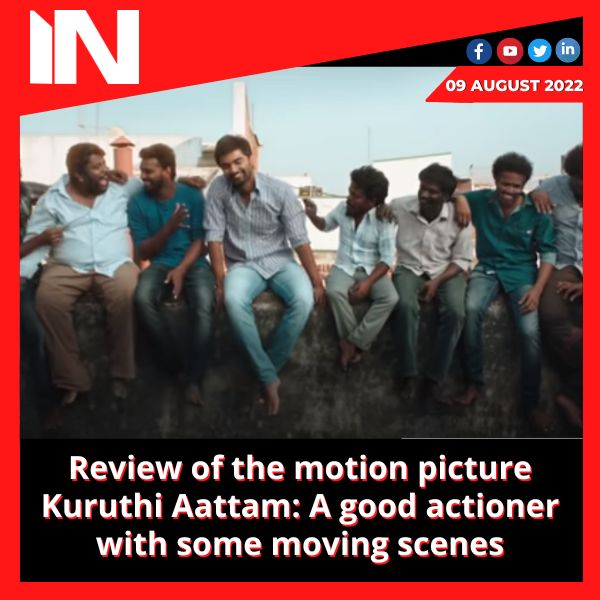 The plot of the movie Kuruthi Aattam is that Shakthi, a patient at a government hospital, befriends Muthu, a drug lord’s son in Madurai. He is forced to exact revenge on those who are to blame for his untimely death.
Review of the film Kuruthi Aattam: After a strong debut in 2017 with 8 Thotakkal, director Sri Ganesh has now released his second movie, in which the up-and-coming director has managed to live up to expectations. An intense, uncut action movie with some brilliantly moving moments is Kuruthi Aattam. The world that Sri Ganesh has created is full of compelling characters who not only reveal themselves as the story goes on but also change over time.

Kuruthi Aattam is a respectable movie worth seeing, despite the fact that the story isn’t particularly original.

Arivu (Prakash Raghavan) gets into a fight with Shakthi (Atharvaa), who works as a hospital attendant, for making fun of his friend. This puts his life in danger because Arivu is Gandhimathi’s (Radhika Sarathkumar) close aide and the son of Madurai kingpin Durai (Radha Ravi). However, the same incident earns him Muthu’s (Kanna Ravi), Gandhimathi’s son, friendship. Muthu, who is also Arivu’s friend, makes an effort to resolve their differences and protects Shakthi whenever he is in danger.

In the meantime, Kanmani, a young girl in the hospital with a severe viral illness, and Shakthi are developing a lovely friendship. Even though everything goes according to plan and Shakthi is about to embark on a new life with his loved ones, Muthu’s passing shatter all of his dreams.

The screenplay and character development by Kuruthi Aattam are really intriguing. Every character has a backstory, and the narrative is written in a way that highlights those stories. We meet so many characters in the first fifteen minutes of the film that it is difficult to even determine who is related to whom. Although the characters are introduced right away, Sri Ganesh delays revealing the mystery surrounding each of them.

The tale of Kanmani, the young child who is admitted to the public hospital, is stirring and heartfelt. It occasionally moves us while also introducing a fresh plot. After serving years in prison, her father finally gets to see her, only to ruin their lives. Arivu’s character and Daniel Balaji’s in Polladhavan are quite similar. The belief that he is incapable of anything by those around him drives him to commit even more crimes.

The majority of actioners’ tales centre on friendship, betrayal, and some egoistic traits. Kuruthi Aattam is the same as before. Friendship, feelings, and every other component required for such a film are present in the proper ratios. The pre-climax sequences, however, drag a little and disrupt the overall flow.

It’s enjoyable and energising to watch Muthu and Shakthi’s friendship scenes. Radhika Sarathkumar’s portrayal of a kingpin in Madurai is compelling enough to keep viewers’ interest. The romantic scenes between Atharvaa and Vennila, who is portrayed by Priya Bhavani Shankar, add to the story without detracting from it.

The movie’s main selling point is its sequence of stunts, which is why they deserve special attention. However, the editing seems hurried and doesn’t allow enough time for the audience to empathise with the characters being presented. The director abruptly cuts to the next sequence, which is in a completely different mood, after setting up the audience to see a character’s life.

Kuruthi Aattam is an adequate action movie overall, but the second half’s script could have been much stronger.

Advertisement
Related Topics:aattamactionergoodMotionmovingpicturereviewscenes
Up Next

Review of the film Kaatteri: This scary comedy has passed its prime