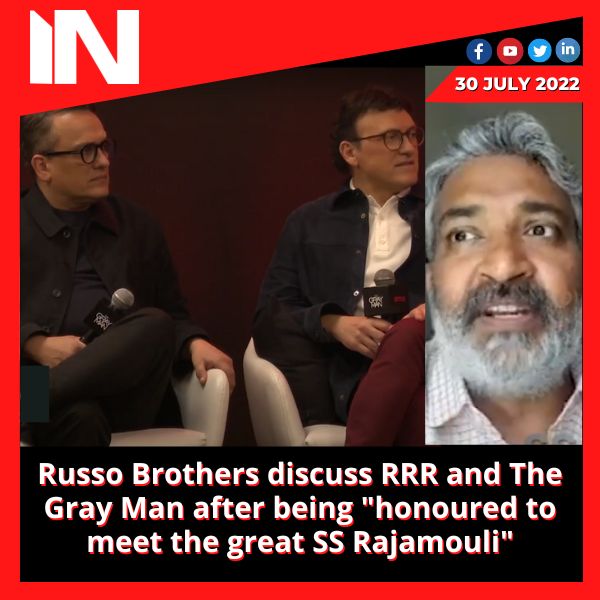 The Russo Brothers, Joe and Anthony, who directed Avengers: Endgame and The Gray Man, expressed their admiration for Indian director SS Rajamouli, known for blockbusters like Baahubali and RRR. The Russos tweeted about meeting the well-known director and referred to him as “great” while sharing their recent interview about the cinematic language. Rajamouli responded on Saturday, saying it was his “honour and pleasure.”

Russo Brothers recently spoke with Rajamouli about the universal language of the action genre, and they shared that conversation on Saturday. A few hours later, Rajamouli tweeted the Russos and said, “The honour and pleasure are mine..” They wrote, “Such an honour getting to meet THE great SS Rajamouli” (folded hands emoji). It was a wonderful exchange. I’m eager to meet you and gain some insight into your craft.

The conversation in question took place online, with the help of Entertainment Weekly, and the filmmakers discussed their most recent movies, RRR and The Gray Man. Ryan Gosling, Chris Evans, Ana de Armas, and Dhanush make their Hollywood debuts in Russos’ recent film, The Gray Man. On July 22, the movie became available on Netflix. A sequel and spin-off have already been announced. The movie RRR, directed by Rajamouli and starring Jr. NTR and Ram Charan, was a huge hit, grossing about $1200 crore worldwide. Since it was made available digitally on Netflix, it has developed a cult following in the West.

The Russos recently visited India to promote The Gray Man. While there, they had the opportunity to mingle with several Indian celebrities, including Vicky Kaushal and the filmmakers Anand L Rai, Raj, and DK. RRR had previously received praise from Joe Russo on social media, who called it a “well done epic.” During his visit to India, he told PTI, “It’s big right now because of Netflix, RRR was a great movie. It had nice, strong themes, stunning visuals, and a really moving tale about brotherhood, in my opinion.

Many Western creators and directors have praised RRR, including Scott Derrickson and James Gunn, who directed the Doctor Strange and Guardians of the Galaxy films, respectively.

Stunning in a desi kurta and dupatta, Emma Thompson stars in a Shekhar Kapur movie

Why Johnny Depp appealed the libel case against Amber Heard, according to his attorney