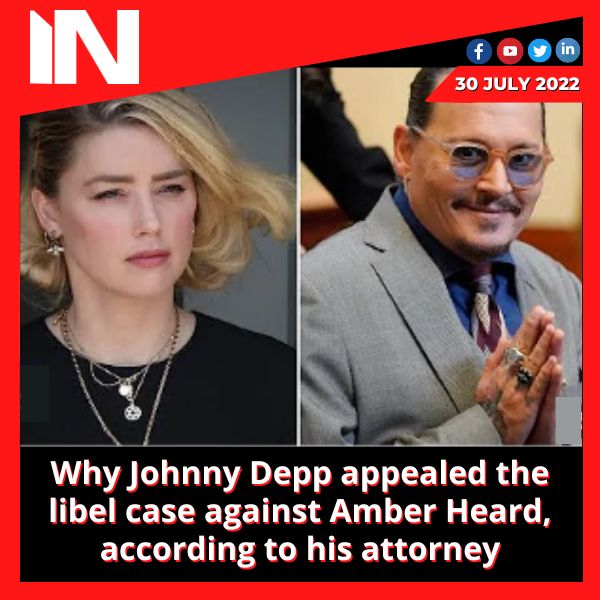 In a recent interview, Johnny Depp’s attorney Camille Vasquez discussed the actor’s decision to appeal the results of his defamation trial. She claimed that if Amber Heard had not insisted on continuing to “litigate this matter,” Johnny would have “moved on” from the trial. As the case progresses, Camille continued, Johnny’s legal team has a strategy to “protect” its “client’s interests.”

A 2018 article that Johnny Depp’s ex-wife Amber wrote for The Washington Post about her experiences as a victim of domestic violence sparked a lawsuit, according to his attorneys, because it falsely accused him of being the abuser. Amber had submitted an appeal last week against the $10.35 million settlement sum that had been given to Johnny in a judgement from their defamation trial on June 1.

Camille, who rose to fame during the prominent trial, recently spoke candidly about the ongoing legal drama involving Johnny and Amber with CBS Morning host Gayle King. Is it safe to assume that none of you would have appealed if she (Amber) hadn’t challenged the verdict in the defamation case? Would you have changed course? Yes, that is a very fair statement, Camille said in response, adding, “We have to protect our client’s interests.”

According to Johnny’s attorney, the actor will be “protected” as long as the lawsuit is active. The attorney responded to Gayle’s query about Camille’s ability to recover while “both sides are still in court arguing,” saying, “It’s a pretty standard legal procedure. Our only wish is for the court to uphold the decision, which we believe was the correct decision, and permit both parties to proceed.

The defamation case was recently heard in a US court, and Amber’s attorneys recently claimed that the court “made errors that prevented a just and fair verdict consistent with the First Amendment” (of the US constitution). The following day, Johnny also submitted a legal notice to challenge the $2 million judgement against him that Amber’s defamation case jury had imposed.

Advertisement
Related Topics:AmberheardAttorneycasejohnnydepplibel
Up Next

According to a chapel employee, Jennifer Lopez and Ben Affleck sobbed as they said their vows during their Vegas wedding.