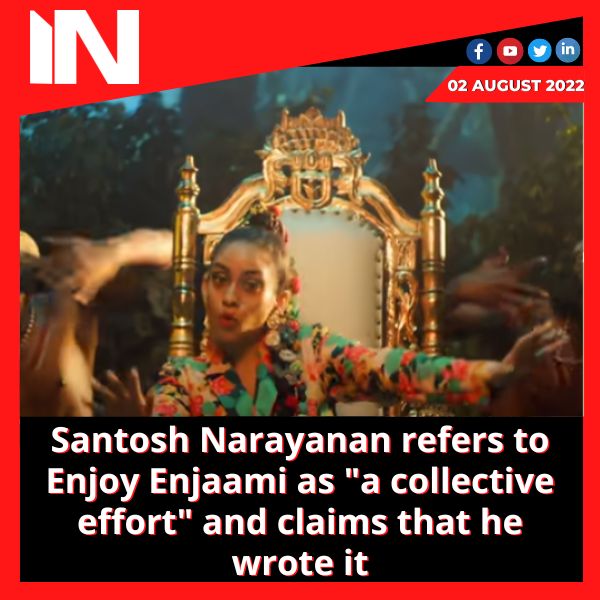 Arivu, a singer, writer, and rapper, made claims that he was not given credit for the popular Tamil song Enjoy Enjaami when it was performed live a few days ago at the 44th Chess Olympiad. Music composer Santosh Narayanan has responded to these claims. Arivu revealed his exclusion in an Instagram post on Monday and claimed responsibility for writing, performing, and composing the song.

In a two-page statement responding to Arivu’s accusations, Santosh referred to Enjoy Enjaami as “a team effort.” He continued by saying he wrote the popular song. “Dhee had the idea for a song that praised our heritage and the natural world in December 2020. After that, I co-sang, co-arranged, co-programmed, and recorded Enjoy.

Enjoy Enjaami was composed by Santosh Narayanan, according to the emcee at the Chess Olympiad opening ceremony; Arivu was not even asked to perform. “We decided to have each artist contribute a tune or a verse to the song rather than just having them perform on Enjoy Enjaami. While Dhee and Arivu agreed to sing the song, they both contributed to its conception. Many of her lines’ melodies were co-composed by Dhee and Arivu, who also agreed to write the lyrics. Santosh continued, “I composed the remainder of the tune as well as Arivu’s portions.

Santosh thanked writer-director Manikandan in the statement for “carefully selecting the foundation of the lyrics for this song and spending so many hours with Arivu to create a flow and script for the song lyrics as well as inspiring him with so many real-life stories and cultural history.”

Arivu’s absence from the Enjoy Enjaami performance at the Chess Olympiad, according to Santosh, was due to his being abroad; the organisers were informed of this. The performance included his recording.