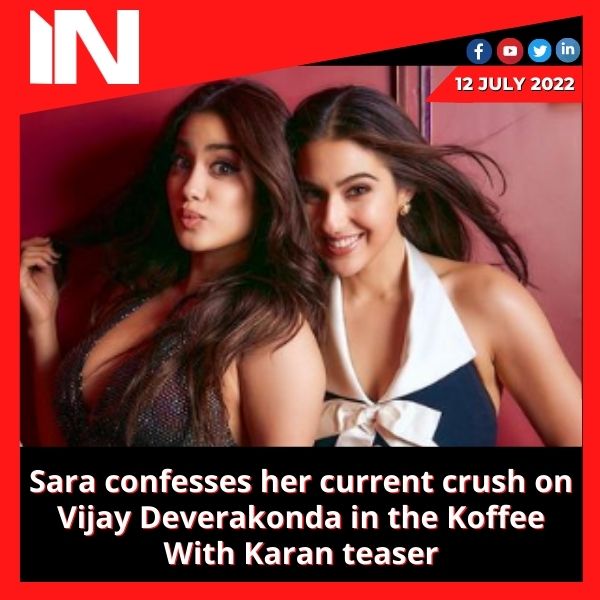 The teaser for the second episode of Karan Johar’s popular talk show, Koffee With Karan, has been released. Sara Ali Khan and Janhvi Kapoor will be on the Koffee sofa in the upcoming episode.

In the teaser, Karan begs Sara to reveal the person she is currently crushing on. She first baulks at naming a name, but eventually caves and admits it’s Vijay Deverakonda. Janhvi, who is seated next to her, can’t help but laugh. Sara inquires of Janhvi, “Do you like him?” when Karan comments how often she is seen with Vijay.

He’s everyone’s ex, she responds when Karan asks her to talk about her “ex.” Recently, Sara and Kartik’s relationship was made public by Karan.

It all began when Sara made her first appearance with her father Saif Ali Khan on Koffee With Karan. She had acknowledged having feelings for Kartik. They later began dating after being cast together in Imtiaz Ali’s Love Aaj Kal. Karan remarked in a statement to India Today, “I call this couch the couch of manifestation.

Just say a name, I was like telling Kriti (Sanon) the other day. Because Vicky (Kaushal) collapsed after Katrina (Kaif) on this couch said she believed they would look well together, we know that they are married now. They began dating when Sara (Ali Khan) mentioned Kartik (Aaryan). Season after season, Alia (Bhatt) brought up Ranbir (Kapoor). Today, she is married to him and is expecting his gorgeous child. That this couch has truly manifested so many connections is great.

The seventh season of Koffee Featuring Karan debuted last week with Alia Bhatt and Ranveer Singh. On July 14, the following episode will air.

Top 5 serious burns of all time, according to Deepika and Kangana, on Koffee with Karan