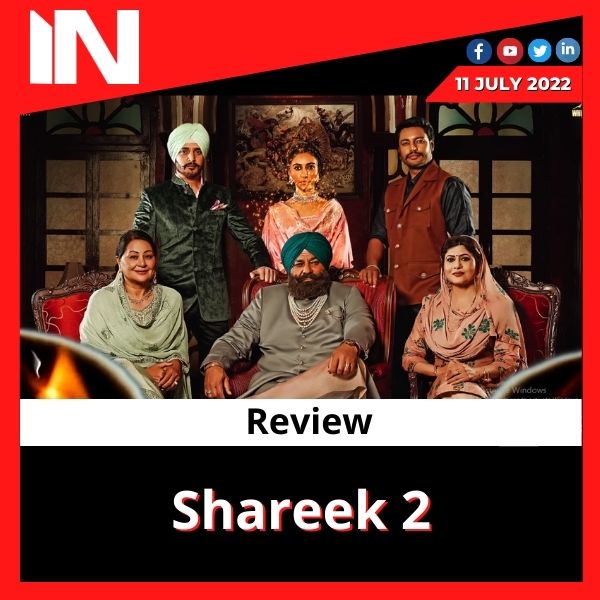 The narrative opens in flashback with an elderly Jaswant Singh Randhawa, also known by his stage as Jassa (Jimmy Sheirgill), acting as the storyteller to his son, who has come to exact revenge for the murder of his mother at Jassa’s hands many years earlier. What follows is a story of treachery, retaliation, and miscommunication that has left both the families of Jassa and his stepbrother, Gurbaz, in a bloodbath (Dev Kharoud). The plot in Shareek 2 is a masterpiece; it is engrossing, captivating, and intriguing, all of which are due to the author. The film weaves the well-known land dispute in Punjab, which has infamously split families for ages, but it does not address a novel issue; rather, it presents it to viewers while drenched in unforeseen intrigue.

The actors playing the roles of Jimmy, Dev, and Sharan Kaur, who plays Rupi, do this drama perfect credit. After a few years, Jimmy has returned to Punjabi cinema, and what a comeback! His subtle acting as the patriarch of the legitimate Randhawa dynasty and the gravitas with which he portrays Jassa, juggling the roles of a devoted spouse and a man who resorts to honour killing, are magnificent. His performance of Jassa serves as a sharp reminder of the necessity for him to appear in more Punjabi movies.

Dev Kharoud, who has so effortlessly converted audiences from wrath to sympathy for Gurbaz as he navigates the transitions his character goes through from being a son seeking harsh retribution to a sincere lover who forgives his lady even though she is poisoning him, plays yet another grey shade. Dev may be reproducing the intensity of his past roles, a skill he has mastered, but in this movie, his role variances are noteworthy.

In Shareek 2, Mukul Dev, who plays the shakuni chacha and never lets the tension between the two stepbrothers die down, is the only (surprise) bad character. Congratulations to Mukul for maintaining the suspense in the story without actually revealing what his future steps will be.

Sharan is a relative newcomer to Punjabi cinema, but in Shareek 2 she demonstrates maturity beyond her years and experience by handling Rupi’s part, which is essential to the brothers’ animosity toward one another. Amar Noori, who plays Gurbaz’s mother, is especially deserving of praise for her pathos-filled portrayal of a wife denied a respectable position in society. Despite having a small role in Shareek 2—Bhupinder Singh Randhawa—Yograj Singh’s presence is a must-see delight.

The soundtrack, which is both captivating and profound, enhances the captivating narrative of the story and maintains the mood of melancholy.

The credit for Shareek 2 ultimately falls to filmmaker Navaniat Singh, who skillfully and elegantly edited a story from Punjab’s rural interior. Anyone who questions if the Punjabi film industry has enough content should see this movie.

A career-best performance from Sai Pallavi in one of the most significant Tamil movies in recent memory, according to the Gargi review