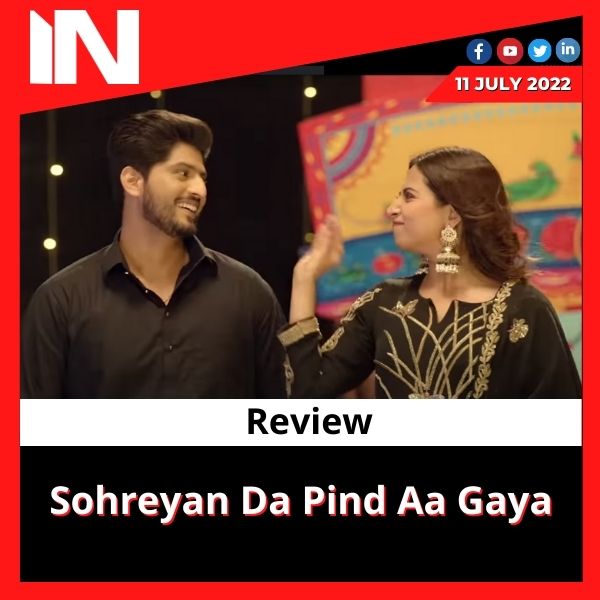 The narrative of Raje and Rupi is told in “Ghund Kadh Le Ni Sohreyan Da Pind Aa Gaya,” which is set in the 1990s. These two are utterly in love and unable to be apart from one another. She can’t wait to refer to his “pind” as her “sohreyan da pind,” and he thinks of taking her home as his wife. Fortunately, Rupi’s request is also granted when Raje’s village sends her a marriage proposal; however, Raje’s cousin Jass turns out to be the intended spouse instead of Raje. When Raje learns that Rupi has moved on, he decides to exact retribution. At first, the bereaved man tries to numb his anguish with drink and depressing music.

He assures Rupi that he will only marry a rural girl and that he will do the same. And that is where the endless battle between two loves, who had previously been willing to sacrifice everything for their relationship, begins.

As Rupi and Raje, Sargun Mehta and Gurnam Bhullar have once again shown that it is difficult to match their on-screen chemistry. Their on-screen love and passion convey an innocence and purity of feeling that is as sweet as honey. They depict a flawless love that is only found in books.

But what would a love story be without some hiccups? The only hiccup in their story is securing their parents’ approval for their wedding. Now, Raje is certain that he will be able to win his parents’ approval by any means necessary, but Rupi is less sure. And even though Raje succeeds in doing his part, fate flips everything. From that point on, they start arguing and fighting, which, to be honest, is the movie’s main selling point.
We won’t lie; we were initially pulling for Raje and Rupi, but after their fight began, we found ourselves enjoying it even more.

Rupi employs every stratagem in the book to make sure that no family in their right mind agrees to Raje’s proposal even though he makes every effort to find a suitable lady for marriage from her village.

While we adored Sargun and Gurnam’s portrayal of heartbroken rivals, we also have to give writer Amberdeep Singh credit for the film’s hilarious phrases and turns of phrase.

Pollywood is renowned for its situational humour and one-liners, and Amberdeep is well-versed in how to operate within the parameters of a rom-com. Additionally, Ksshitij Chaudhary did a fantastic job directing each scene so that the crowd laughed out loud in their seats in his role as the ship’s captain.

But more than just the efforts of the writer-director and the star were responsible for the film’s overall entertainment value. Every supporting actor in the movie must share the glory and the crown with them. Mintu Kappa, who portrayed a friend who never leaves your side, and Hardeep Gill, who portrayed a worried but incredibly loving father, both deserve special mentions. The two made their profession look quite easy, and their performances were able to keep the audience seated in their seats.

But other factors contributed to the movie’s success beyond the efforts of the writer-director and the star. With each supporting actor in the movie, they must split the praise and the crown. Furthermore, Hardeep Gill, who portrayed a worried but incredibly loving father, and Mintu Kappa, who portrayed a friend that never leaves your side, deserve special recognition. The two were able to hold the audience firmly in their seats with their work since they were so natural at what they did.

Second, while the movie’s peak was excellent, the finale felt simultaneously sudden and a little too predictable. However, if we overlook these two points, all that remains to be said is that it is a fantastic love-revenge narrative that will make you laugh out loud.

Advertisement
Related Topics:Featuredgayapindsohreyansohreyandapindaagaya
Up Next

Review of the film Titu Ambani: A dull and dry family drama