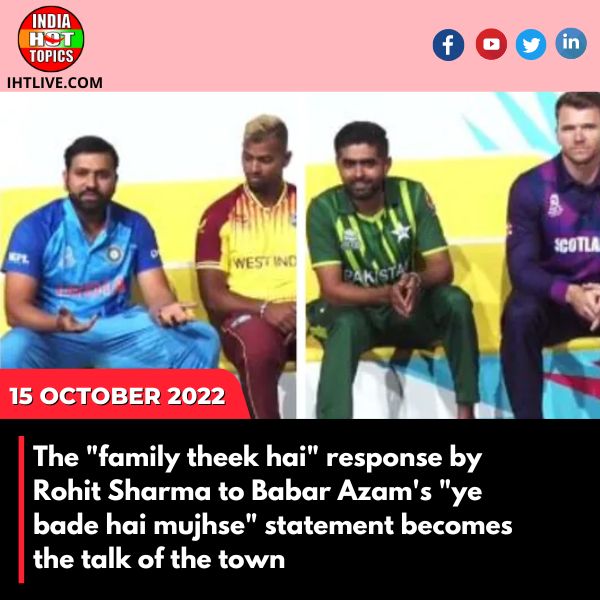 It is undeniable that the cricketers from India and Pakistan get along well. The relationship between the players on either side remains unaffected by the stress, drama, pressure, and expectations that accompany an India-Pakistan encounter. One of the attractions of the Asia Cup in the UAE was the camaraderie between Pakistan’s mainstays Babar Azam and Shaheen Shah Afridi and their coaches Mohammad Yousuf and Saqlain Mushtaq and India’s top players Rohit Sharma, Virat Kohli, KL Rahul, and Rishabh Pant. And if the pre-tournament press conference with all the captains was any indication, the T20 World Cup in Australia will be similar.

Before the commencement of the eighth T20 World Cup in Melbourne, the captains of all 16 teams gathered in two groups to speak to the media. The second group, which also contained the captains of the West Indies Nicholas Pooran, South Africa’s Temba Bavuma, Bangladesh’s Shakib Al Hasan, Zimbabwe’s Craig Ervine, and Scotland’s Richard Berrington, was led by India’s Rohit Sharma and Pakistan’s Babar Azam.

Babar and Rohit appeared to be two friends who just so happened to represent different nations in cricket. They were all complimentary of one another throughout, but when a journalist inquired about the chats they had while competing, they gave a great explanation of the friendship between India and Pakistan.

Ye Sab Baat Hoti Hai (Whenever we play against Pakistani players, who we first encountered at the Asia Cup, we discuss how things are doing at home and in our homes. The same issue was also confirmed by cricket players from our previous generation. We simply discuss current events, daily activities, and any new cars that have recently been purchased or are on the market, stated Rohit during the press conference.

Workout for Diwali: How to prepare the upper body

While having her makeup done for Karwa Chauth, Sonam Kapoor breastfeeds her son Vayu, and Anand Ahuja claims the star is “made for this.”