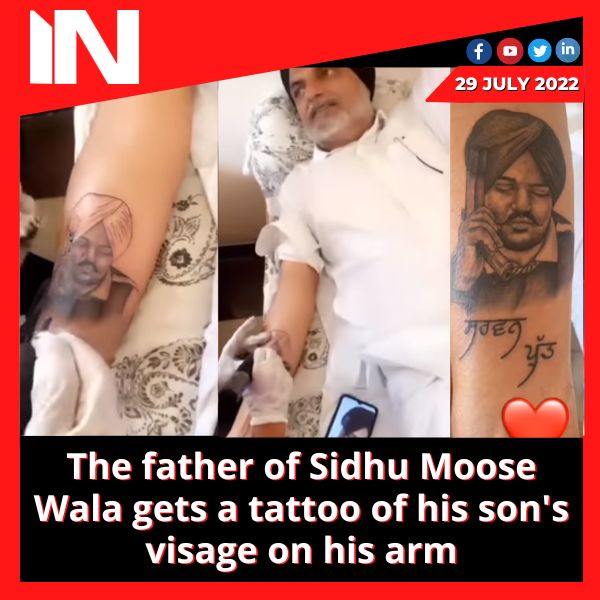 Balkaur Singh, the father of Sidhu Moose Wala, had a tattoo of his son’s face placed on his arm. Fans praised and showered him with affection in a video tribute to the late Punjabi singer-rapper that was posted on social media. When Sidhu was was shot on May 29 in Punjab, he was 28 years old.

The late singer-father rapper’s got a tattoo of his son’s face along with the Punjabi word “Sarwan Putt,” which roughly translates to “obedient or caring son.” In honour of her deceased son, Charn Kaur, Sidhu’s mother, also got a tattoo. Her tattoo read “Shubh Sarwan Putt” in Punjabi, matching that of her husband. Shubhdeep Singh Sidhu was the real name of the late singer-rapper.

Sidhu Moose Wala’s official Instagram account, which the family decided to keep active to stay in touch with his admirers, posted a video of Balkaur Singh receiving a tattoo. Sidhu’s face is made on his father’s arm in the Instagram Stories video that was posted. An image posted later on Instagram Stories shows a distinct tattoo.

Social media users have shared the image and video widely, praising Sidhu Moose Wala’s parents for their thoughtful gesture. While some mourned the tragic passing of the late singer, others said that his parents were making every effort to preserve his memory.

A fan said, “It is heart-breaking,” in response to the Instagram video of Balkaur Singh getting tattooed that was uploaded on a paparazzi account on Friday. Miss you legend (Sidhu Moose Wala),” someone else added. Another person remarked, “I feel really sad seeing them (Sidhu Moose Wala’s parents).”

On May 29, a gunman in Punjab’s Mansa district shot and killed Sidhu Moose Wala. According to reports, two gang members with connections to the murder of the late singer-rapper were shot and killed in an encounter in the Amritsar district’s Cheecha Bhakna hamlet. Prior to the Punjab state Assembly elections in December 2021, Sidhu joined the Congress party. This was months before his death.