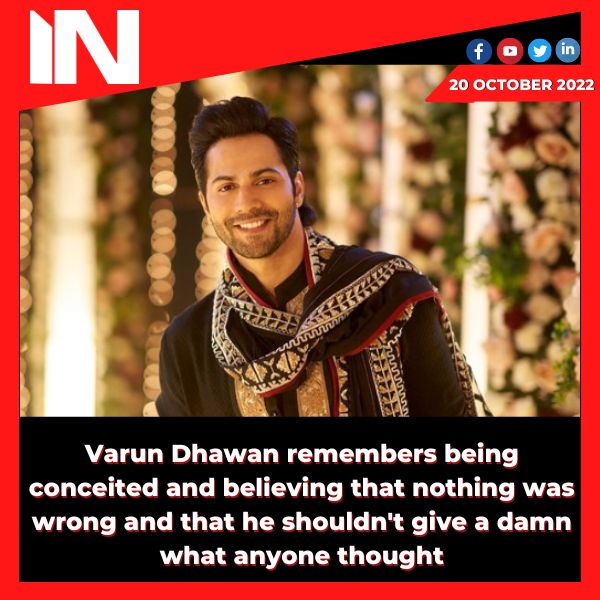 Varun Dhawan, an actor, has acknowledged that there was a point when he was “arrogant” and didn’t care what other people thought. At the premiere of the Bhediya teaser, Varun also discussed how the movie’s director, Amar Kaushik, advised him against including any humour since “people will not take you seriously.” He remarked that he recalls the “cringe-worthy VFX moments” in a number of movies.

In the 2012 movie Student of the Year, which also starred Sidharth Malhotra and Alia Bhatt, Varun made his acting debut. Additionally, he has appeared in the films Badlapur, Dilwale, Badrinath Ki Dulhania, Judwaa 2, October, Kalank, and Coolie No 1. He last appeared in the commercial success JugJugg Jeeyo with Anil Kapoor, Neetu Kapoor and Kiara Advani.

Varun stated, as reported by the news source PTI, “I’ve always tried to pay attention to what the crowd is saying. Not every movie I’ve worked on has been excellent… I constantly strive to advance. Once upon a time, I had haughty thoughts. I shouldn’t even give a damn about what anyone is saying because everything is going great. I feel more accountable now, I guess… I wish to right now take pleasure in the success that Bhediya and JugJugg Jeeyo will bring. I made the movie Bhediya, collaborated with the director Amar, and worked with the producer Dinesh because I listened to the public.”

Varun discussed Bhediya as well “In my opinion, Indian cinema is prepared for this and won’t accept anything less. Looking back, I can see that the VFX has contained some embarrassing moments. However, I did not create the VFX. I can try to collaborate with directors and producers who can effect that shift as an actor. Amar’s first instruction to me was, “You won’t act funny in this movie because then people won’t take you seriously.” Therefore, Amar deserves all the credit for the performance, which hopefully meets his standards.”

Amar claimed that when creating the world of Bhediya, he did not draw any inspiration from Hollywood. He claimed it’s not that they ‘looked at Hollywood and made this’. He added that the writers ‘had a seed of an idea about animals and then we kept improving’. Amar also said that he wanted to make something that’s of ‘international standard, we took all the support to make it’.

Bhediya, directed by Amar Kaushik, centres on Bhaskar (Varun), a werewolf who is bitten by a mythological wolf and turns into one every full moon night. The movie also stars Kriti Sanon, Abhishek Banerjee, Deepak Dobriyal, and Paalin Kabak in addition to Varun. The movie is scheduled to be out on November 25. In addition to Bhediya, Varun will co-star with Janhvi Kapoor in the upcoming social drama Bawaal.

When paparazzi inform Rakul Preet Singh that there are wedding rumours involving Jackky Bhagnani, she responds with “bakwas.”