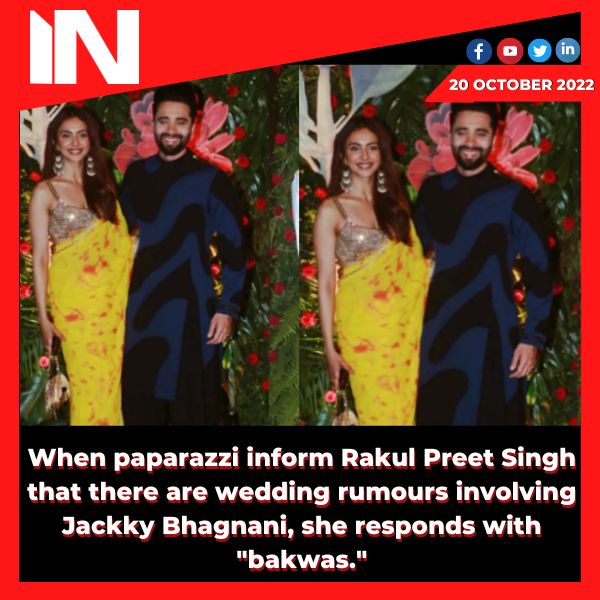 Days after responding to a news article about her reported impending nuptials to Jackky Bhagnani, Rakul Preet Singh joined him on Wednesday for a Diwali celebration in Mumbai. The actor responded to rumours that they were getting married as they posed for photos with Jackky. Rakul and Jackky were spotted leaving the star-studded Diwali celebration that Ramesh Taurani was throwing together.

At the Diwali party, Jackky wore a blue ethnic dress, while Rakul chose a yellow saree with a golden blouse. Jackky Bhagnani turned aside after taking pictures with Rakul so that the actor could take some alone.

Before he could, however, the assembled photographers asked him to keep posing with Rakul, with one photographer leaving the rest speechless with the remark, “Sabko pata chal gaya hai (everyone knows now).” “Kya?” Rakul asked in response to his question. (What?) Sab bakwas It’s all garbage. As they continued to pose for pictures together, Rakul and Jackky grinned.

Earlier this year, Jackky and Rakul made their relationship official. They recently gathered with their friends in London to celebrate the actor’s birthday. Arjun Kapoor and Bhumi Pednekar, Rakul’s co-stars from a forthcoming movie, also joined them. Along with them, Malaika Arora was spotted out having fun. Rakul, who last appeared in the October 14 film Doctor G, recently addressed rumours of a 2023 wedding with Jackky.

Rakul questioned why she had no knowledge of her own life and shared a news that stated her brother had confirmed she would get married in 2023. She tweeted, “@AmanPreetOffl you confirmed?,” tagging her actor brother Aman Preet. You didn’t even tell me, brother, Aur mujhe bataya bhi nahi bro. Funny how I don’t have any updates on my life.

In a recent interview with Hindustan Times, Rakul discussed her relationship with Jackky and stated, “Both I and Jackky have this idea that you should give respect to your partner. We don’t talk about work because we are all so busy. We respect each other’s privacy unless there are specific topics I want to address  being in a relationship. And then security stems in.”

Rakul will be seen next in the film Thank God. It also stars Sidharth Malhotra and Ajay Devgn. Apart from these, she has many films in pipeline, including Kamal Haasan’s Indian 2.

In these photos from the wedding party, Priyanka Chopra dances with a pal while Nick Jonas watches.

Varun Dhawan remembers being conceited and believing that nothing was wrong and that he shouldn’t give a damn what anyone thought.