The biggest names in fashion were in attendance, dressed to impress, at the Met Gala 2022. Few of the attendees, including Blake Lively, Sarah Jessica Parker, and Kim Kardashian, took their looks seriously and provided us with unforgettable red carpet moments. But what were the inspirations for these opulent ensembles? If you’ve been wondering the same thing, we’ve got all the answers. Continue reading to find out.

Sarah Jessica Parker knows how to make a statement on the red carpet at the Met Gala, and she did so again this year for the Gilded Glamour theme. She wore a custom black and white ballgown with a black stone-encrusted veil. The Sex And The City actress collaborated with Christopher John Rogers on a striking, thoughtful ensemble that paid homage to Elizabeth Hobbs Keckley, an underappreciated black designer. Former slave Elizabeth Hobbs made history as the White House’s first Black female fashion designer, serving as the official dressmaker to first lady Mary Todd Lincoln.

In a maroon gown designed by Joseph Altuzarra, Hillary Clinton attended the Met Gala for the first time in 21 years. The floor-length gown paid homage to past American women who have influenced and inspired the former US Secretary of State. Along the neckline and hem, Hillary embroidered the names of 60 women she admires, including Madeline Albright, Abigail Adams, Harriet Tubman, Rosa Parks, Lady Bird Johnson, and her mother, Dorothy Rodham.

“Instead of looking to fashion for inspiration, I turned to the architecture of New York City.” As she arrived with her husband, Ryan Reynolds, Blake Lively had this to say about her Met Gala 2022 red carpet look. Blake wore a Versace two-toned rose gold and turquoise ombré strapless gown with matching opera gloves on the red carpet. It was inspired by the Statue of Liberty, the Empire State Building, and Grand Central Station, as well as the Art Deco design and details of New York’s most famous landmarks. Lady Liberty was even referenced in her seven-spiked Tiara.

Nothing is more American to Kim Kardashian than Marilyn Monroe, and she brilliantly incorporated the icon’s legacy into her Met Gala ensemble. Marilyn Monroe wore the infamous glittering gown to sing Happy Birthday to John F Kennedy (JFK) in 1962. The outfit holds the record for the most expensive gown ever sold at an auction. In 1999, it was auctioned for USD 1.26 million. Then, in 2016, it was auctioned for USD 4.6 million at Julien’s Auctions, and Ripley’s Believe It Or Not Museum bought it.

Natasha Poonawalla mixed Indian heritage and glamour with the Met Gala’s ‘Gilded Glamour’ theme on the red carpet. The golden tulle saree and hand-forged bustier were designed by the socialite in collaboration with Sabyasachi and Schiaparelli. Natasha’s Met Gala vision, according to Sabyasachi “was to interpret the ‘gilded glamour’ dress code through an Indian lens that celebrates its multi-culturalism and authenticity. And they succeeded in every way.” And she perfectly nailed it.

Olivia Rodrigo wore a shimmery lavender Versace gown with draped shoulders and a risqué thigh-high slit on the side to the Met Gala red carpet. Sheer opera gloves, a metal clutch, butterfly hair adornments, and a diamond choker necklace completed the look for the Deja Vu singer. Every detail of her ensemble was stunning, and it was inspired by 1920s meets Y2K. Even the beauty look was influenced by the era. Olivia’s make-up artist revealed in an interview with Vogue that she and Olivia were inspired by the opulence of the 1920s as well as funky Y2k elements (notice the thinner brows inspired by the same era).

Malaika Arora looks sultry in a patterned strappy maxi dress during a night out in Mumbai.

Shilpa Shetty’s birthday is today, and she’s shown us six times how to bring the disco to your wardrobe with lots of glitz and glam 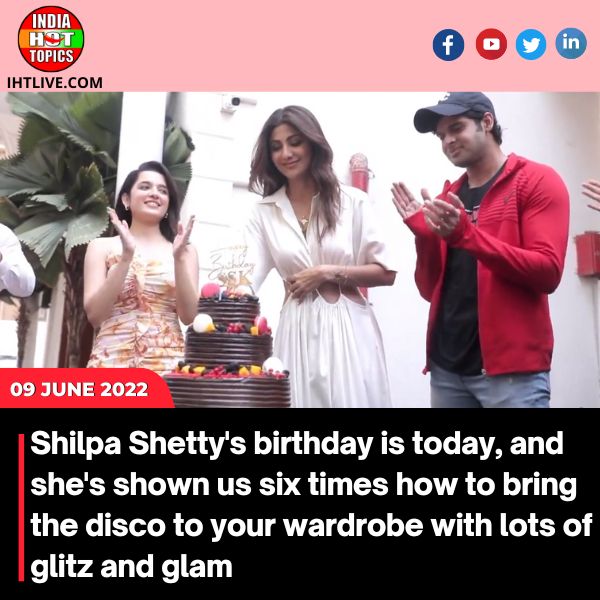 Allow the good times to continue! Gemini is a quirky sign with a penchant for glitz and flare. And here’s how you make a splash as the best-dressed party animal this hot summer-cum-monsoon month deserves with a tribute to light and sassy attire. It’s Shilpa Shetty Kundra’s birthday, which is fortunate for us. The Nikamma actor keeps her sartorial style wild with quirky ensembles, but our favourites are the ones with sheeny goodness. Stay on the page if you want to be inspired.

Go pink! Ready, steady, go! It was all about sequins to love and drool over in Nadine Merabi’s one-shoulder dress. This tiny dress featured a holographic look as well as elements like an asymmetric hem and a drape detail with a sash that cascaded down. Pick lace-up gold strappy stilettos, rings, and earrings to make this party look as impressive as Mohit Rai’s.

Who said a white shirt had to be reserved for office wear? As a fashionista, you should defy the rules. There’s nothing quite like a button-up shirt that isn’t overly polished, and the slits on the elbows are particularly appealing. This was tucked inside House Of CB’s high-waisted violet sequin skirt, which had a dramatic draped element. Rings, a lariat chain, and pointed-toe pumps will help you to shine the brightest.

Cropped tops are the way to go. But there’s one more thing to add to the list. Nadine Merabi’s satin bootcut trousers wowed the mother-of-two. Her sleeveless black cropped costume included a tie-up accent at the back, and it appeared brilliant gold with the flood of sequins. For the star, black embellished pumps, rings, and a chain-link necklace completed the look.

Grasp the gold as soon as possible! Shilpa looked stunning in an off-shoulder gown with gold glossy embroidery that ran in patterns for an awards night. The corset had a ruched detail, and the netted tulle fabric sat like a top with a plunging neckline. The translucent balloon sleeves were attached to this. Wear matching accessories to complete the look.

Fringes that are accompanied by a fire warning! In a Yousef Aljasmi halter-neck embellished dress with cold-shoulder sleeves, a front slit, and an asymmetric hem, the Phir Milenge actress exuded retro elegance. A headband, stacked hand accessories, and peep-toe stilettos completed this stunning ensemble.

Here’s what it looks like when a disco fantasy comes true. Naja Saade’s metallic blue jumpsuit was worn by the Apne actress. A square neckline, puffed-up shoulders, and a black elongated belt adorned this one-piece with full sleeves. Shilpa looked great in Christian Louboutin pointed-toe shoes and silver hoop earrings.