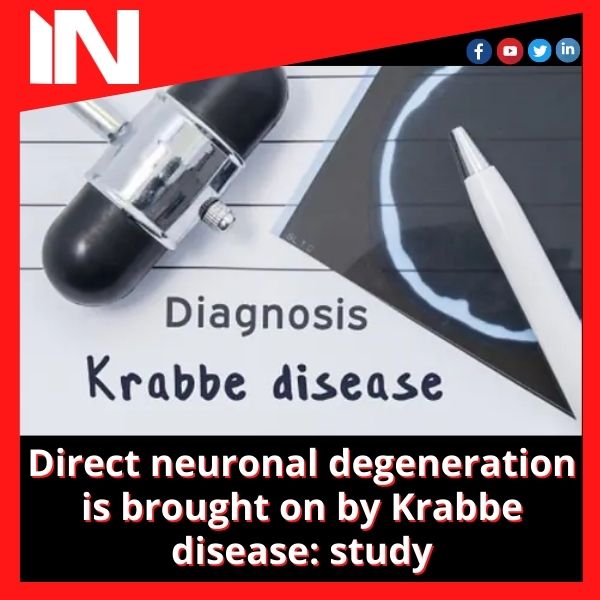 A recent study found that the gene mutation underlying Krabbe disease directly causes neuronal degeneration, independent of how it affects other cell types. This new mode of action for the mutated gene provides a clearer view of the illness process and could aid in the creation of new treatments.

Galactosylceramidase (GALC) gene mutations are the primary cause of the uncommon autosomal recessive neurological ailment known as Krabbe disease. The lysosomes contain the GALC enzyme, and its lack causes the lipid psychosine to accumulate. Cell membrane instability, degeneration, and cell death are brought on by the buildup of psychosine in the brain and other areas of the body.

One of the main pathological characteristics of Krabbe disease is the loss of myelin insulation around the nerves. Oligodendrocytes, which produce myelin, have naturally been considered to be the disease’s initiators, with the degeneration of neurons acting as a later effect of this myelin loss.

Other, more recent research has suggested that neurons may be impacted independently, but it has been challenging to test that theory because GALC is widely expressed in the brain and its loss due to disease affects all cell types. To get around this obstacle, the authors developed a mouse model in which GALC expression was only suppressed in neurons while the regular gene was still active elsewhere.

Researchers discovered that psychosine built up in neurons, causing irregularly shaped lysosomes, enlarged axons, and an increase in neuronal mortality, as well as neuroinflammation and deficiencies in mice’s motor function and coordination. No oligodendrocytes were lost, but the absence of neuronal GALC expression did result in a decrease in myelination, perhaps as a result of toxic effects on myelin sheaths from the accumulating psychosine.

For the first time, according to Shin’s findings, galactosylceramidase production in neurons is necessary to preserve and safeguard neuronal function, regardless of how it may affect oligodendrocytes that produce myelin. These findings imply that the lack of the enzyme in neurons may directly contribute to the pathogenesis of Krabbe disease, and that Krabbe disease treatments may require to target the lack of galactosylceramidase production in neurons.

Bhagyashree gives a brief account of her leg day